Oh, Gil, Gil, Gil. I know that your desperate need to salvage some shred of dignity out of this season has lead to radical measures, like actually coaching, but surely you know that the reason your team is in this mess in the first place is because they’re not only athletically untalented, but incredibly dim. Building an offense around trickery and cleverness is doomed to failure in too many ways to even begin to describe. You’ll be lucky if the team hasn’t accidentally set itself on fire by the end of the first quarter. Gil’s fear that any other team might be trying to find out about the Mudlarks’ top secret plans is hilariously misplaced as indicated by the sadly deserted hall outside of LOCKER LOCKER, completely devoid of spies from rival high schools or snoopy reporters looking for a scoop.

There are so many more interesting phrases that could have followed “those years” in panel two. “Picking pockets,” for one. Or maybe “working as a magician at children’s parties.”

Today’s Mark Trail is yet another example of a recurring phenomenon in which I think the chatter of commentors has prepared me for the action in a strip, only to still be blown away when confronted with the reality. As so many of you noted, Johnny clearly isn’t punching Malone; he’s rubbing his fist in the cigar-smoking cad’s face, forcing his nemesis to smell whatever foul-smelling substance he’s smeared across his knuckles (don’t think about what that might be don’t think about what that might be).

The depiction of that saucy, arrogant Malone in panels one and two is actually quite charming. He looks like he just strode off of some Merchant Marine freighter, circa 1943, and if the Nazis tried their best to send him to the bottom of the Atlantic and failed, he’s not going to let some pissy little French Canadian discombobulate him with his stinky hand.

WAIT WHAT MARY DIDN’T CHECK THE CONDO BYLAWS BEFORE BRINGING HOME A DOG? HAS SHE GONE COMPLETELY INSANE? The condo bylaws are like sacred scriptures to Mary (as indicated by the fact that she keeps them in the upper drawer of her dresser, as if they were a Gideon’s Bible) and now she’s throwing ALL THAT AWAY because of some yapping pooping little mutt? Oh, Mary, the other condo-dwellers will be right to chase you out of Charterstone with torches and pitchforks — not because you’ve violated the condo codes, but because you’re obviously some kind of reverse pod person impostor who actually has normal human emotions.

Today’s B.C. took on a current event in a weird, loopy, mushy way that didn’t make much sense and also wasn’t funny. Somewhere, Johnny Hart must be so proud. 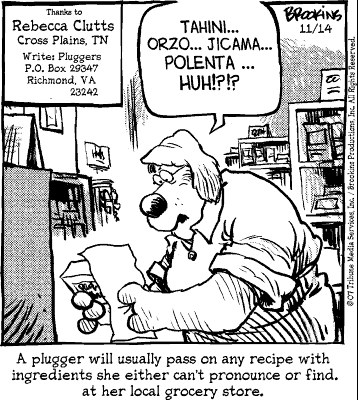 Pluggers hate foreign food almost as much as they hate actual foreigners.