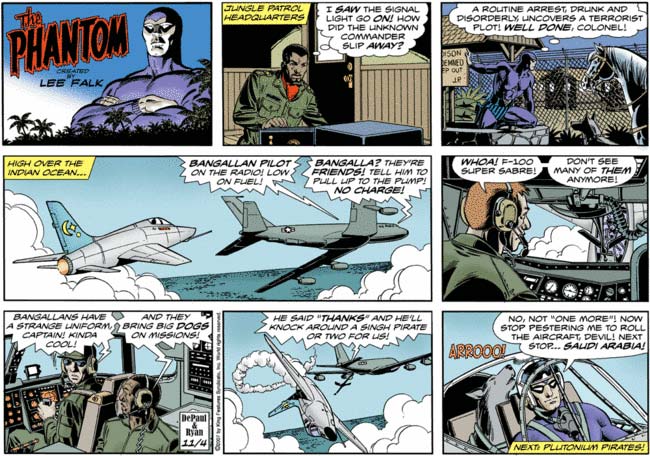 I’m not a big defense policy expert or anything, but I’m pretty sure the US Air Force is not in the business of handing out free jet fuel to random Vietnam War-era aircraft, no matter how friendly the country is whose flag is painted on the tail. Perhaps Bangalla is willing to turn a blind eye “enhanced interrogation techniques” (likely, if the slap-happy antics of the Unknown Commander are any indication) and demands payment in sweet, sweet petroleum products.

The Phantom NEXT! boxes are pretty generally awesome, but few have brought me as much pleasure as today’s. “Avast, swabbies! Be sure ye be wearing yer film badge dosimeter, lest ye suffer from radiation sickness! Ahhhr!” 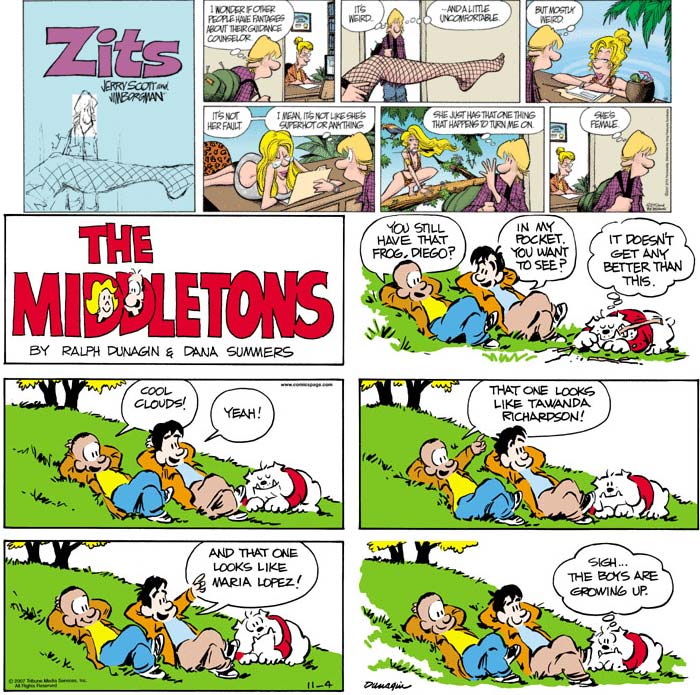 At last, two Sunday comics that aren’t afraid to admit the hard truth about teenagers: that they’re nothing but barely controlled hormone-soaked lust-beasts. Today’s Zits honestly hits a little too close to home for me, as one of my high school’s guidance counselors was a primary subject in my teenage fantasy life, which I’m sure was also true for most of the other boys and several of the girls. Unfortunately (or perhaps fortunately, in the interests of me having coherent conversations about college application essays), I was assigned the other guidance counselor, who was a avuncular fiftysomething dude, and who was very nice but whose naked lower back I was frankly glad to never see unprompted in my mind’s eye.

Today’s Middletons is an instructional example of how the throwaway panels at the beginning of a strip (so named because some newspapers remove them to make layout easier) can really change the tone of a comic. The complete strip today offers a poignant look at that moment when young people are on the cusp of adulthood, beginning to think of grown-up matters while still clinging to childish things. But the version in my paper started with the “Cool clouds” panel, and thus was basically two teenagers talking about girls they want to bang. On the bright side, Baltimore Sun readers were spared the unsettling undertones of the “do you want to see the frog in my pocket” exchange. 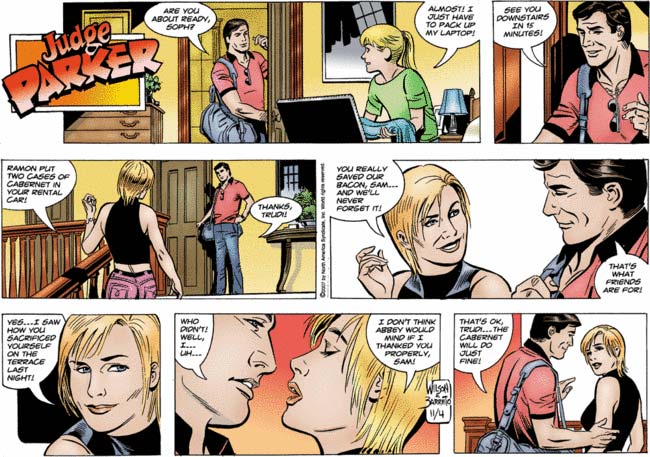 Speaking of raging hormones, I’m getting pretty tired of every improbably proportioned female in this strip hurling herself at Sam Driver. His wife I can sort of understand (though you think she’d have given up by now), but what Sam’s got that justifies, say, Trudi lunging at him lips-first in the next-to-last panel is beyond me. It’s like he’s doused himself in some chemical that makes him irresistible to women (“reverse alcohol,” in the memorable formulation of Dinosaur Comics) — not because he wants to seduce them, but because he enjoys rejecting and humiliating them. If I want twisted, passive-aggressive psychodrama in a serial strip, I’ll read Mary Worth, thank you very much. 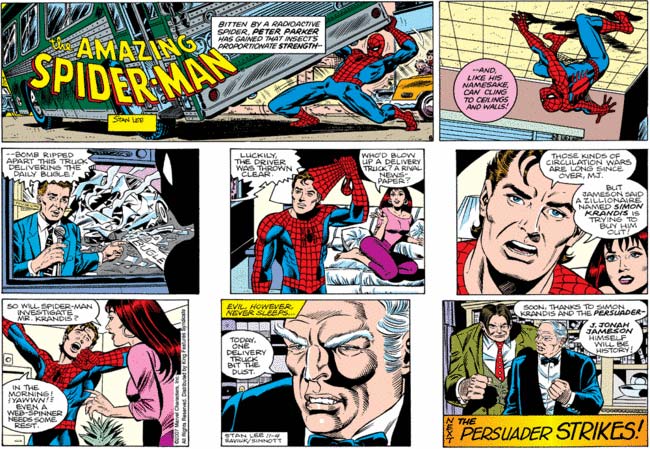 Not being evil myself, I wasn’t aware that a lack of sleepiness was one of the benefits of pledging one’s allegiance to the dark side. Think of all the extra sinister plotting — or, alternately, dusting and laundry — you could do with that extra eight hours a day! It does not, however, come as a big surprise to me that Peter Parker would rather snooze than fight evil. 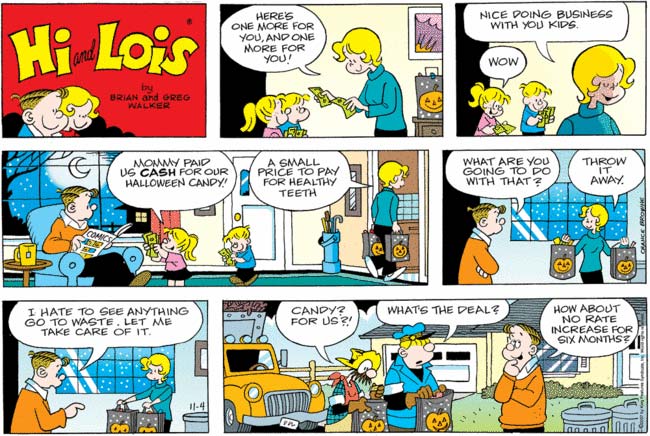 The creators of Hi and Lois do not appear to understand how and by whom municipal tax rates are set.