All hopes that a Judge Parker comic might contain something interesting happening — like, say, a deranged Biff Dickens believing that he’s buzzing the trenches on the Western Front and strafing Sam and Abbey — will of course be dashed. What I’m kind of sad about is that Abbey has been too busy freaking out about her daughter’s burgeoning sexuality to notice that an airstrip was being built right next door to the farm where all her precious pretty ponies frolic. Just think of the exciting action that could have transpired if she had gone to the county meetings to try to block Biff’s permit! The whole thing would have ended up in court, of course, with Abbey represented by Sam, and the newly elected Judge Parker Jr. presiding and handing the case to his ex-partner and campaign manager with a wink. Sadly, whatever plot is actually going to arise is going to be even less interesting than that.

Far be it for me to suggest that Peter Parker use his mutant spider-strength (do they say that?) and other superpowers to go on a killing spree (great power, great responsibility, blah blah blah) … but say just for sake of argument that Spidey did take the Persuader apart like a cheap watch, which I assume means, I don’t know, that his outside would be cracked open and enough of his insides would fall out that he wouldn’t work anymore. Since the only person to see him open the proportional can of whoop-ass of a spider would now be dead and dismembered, wouldn’t Peter Parker’s secret identity still be safe? Unless, of course, this blatant act of Persuasion is not taking place in an empty alleyway as the first panel implies, but rather before a crowd of indifferent witnesses. “Say, Phyllis, look over there at that hulking ruffian attempting to stake a claim over that wimp’s wife by force. Darwin in action, ya know? Kid should try that Charles Atlas program!”

Is Harry Ape the same guy as the maroon-suited gorilla-pimp we saw Slylock lasso a couple of weeks ago? If so, he’s fallen a long way, stealing a vanity (possibly the least butch piece of furniture possible) from Foo Foo Cat for his mommy. Actually, with the original owner having a name like “Foo Foo Cat,” purple is probably a much more macho color for the vanity than whatever it was before he painted it. I’m assuming that the squat, besotted thing clutching Harry’s gut is the aforementioned mommy, though I didn’t think that apes demonstrated such striking sexual dimorphism. 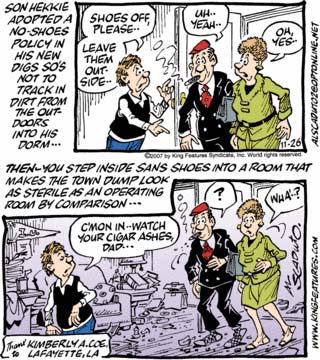 You might recall from previous TDIET appearances that “Kimberly A. Coe” is faithful Comics Curmudgeon reader Trotzenbonnie. She shares with us the tale of her latest triumph:

I sent several ideas to Mr. Scaduto way back in February and he used two but rejected the third. I have a feeling that he just didn’t get it. Well, a few weeks ago I received a copy of the cartoon he worked up for the rejected idea with the attached note: “Hi, Kimberly — A situation similar to your cartoon idea happened to my wife and myself — Our grandson told us to be careful — wipe feet etc. entering his dorm … which was a close second to a hurricane-hit shack in appearance — Thank you for your idea — and Best Ever — Al Scaduto.”
Can you believe that? How the man managed to remember that I sent the idea to him months ago was marvel enough in itself. But he also gave me credit for the cartoon which was totally unnecessary since he decided to work it up based on his own experience. The man is a true prince among men — at least out of all of the men who draw cartoons for a living.

Not to ruin any surprises or anything, but I’ve gotten advance notice from enough readers to know that our dominance of TDIET is going to be particularly strong over the next couple of months. I consider the introduction and endearment this feature to my readers to frankly be one of my greatest achievements.

Dagwood is going to get his carpool high.