I’d love to believe that the narration boxes in today’s Apartment 3-G are setting up some kind of tension between presentation and the underlying reality. I’d love to believe that Neil is practically wrenching Tommie’s arm out of its socket and coming close to hurling her on the floor, but in his self-centered way honestly believes that he’s executing a “graceful spin” and a “sweeping dip” — and that Tommie, despite her fears about a dislocated shoulder, is telling herself that she’s being spun gracefully and dipped sweepingly because she wants romance with Neil so badly. I want to believe all that because that would be kind of interesting. But I think this strip is just kind of poorly drawn.

I’m sorry, your majesty! Do you think that we down here at the county commission have nothing better to do than to show up at the front gate of all the massive compounds within earshot of every general aviation airstrip we approve? We’ve got Biff Dickens’ campaign donations to count, you know! Why can’t you read the 8-point-font ads in the Notices section of the newspaper to find out about the public meetings on the topic like everyone else?

Hmm … after having written that, I’m not entirely sure who exactly my vitriol is aimed at. I guess that’s because I kind of find everyone in this strip irritating.

Meanwhile, someone has framed Johnny Malotte — for murder! Bull Malone’s been shot — but by whom? Someone fired Johnny’s rifle — but who? Is Paul making up for his own perceived failings the only way he knows how? Has Bull faked his own death? Personally, I think the full moon behind Johnny offers a clue — he’s really a werewolf who shot Bull in an animalistic rage when he transformed, leaving him with no memory of the crime when he returned to human status! Sure, the theory needs work — probably a werewolf would have just ripped out Bull’s throat rather than fiddling with some firearm — but I mostly just want to see a Sunday strip about werewolves. 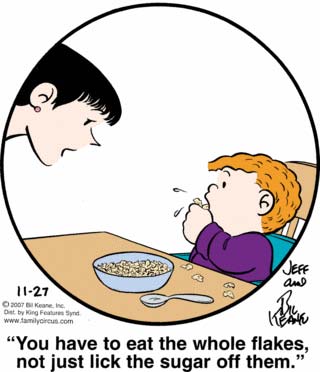 Frosted flakes scattered across the tabletop, limp and soggy with Jeffy spittle, slowly hardening until they’ll be impossible to scrape off the formica = MOST DISGUSTING IMAGE I’VE HAD TO GRAPPLE WITH TODAY THANK YOU VERY MUCH, COMICS.