“Gentlemen, I’ve just heard from the athletic director. It seems that in this so-called sport of ‘football’, you’re supposed to accumulate more points than the opposite team, and your quarterback isn’t supposed to wildly hurl the ball in the direction of the opposing players. We’ve been doing this all wrong, apparently. Who knew?”

I’m not sure where Cully and his thuggish friends are stopping for a snack. It appears to be a bookstore of some sort, albeit one with a sliding glass door. Perhaps they plan to show their hatred for learning and knowledge of all kinds by eating the books rather than reading them.

Also of note today are a pair of classic Gil Thorp back-of-the-head oh-my-God-I-don’t-think-those-people-have-any-faces shots of dudes with wildly inappropriate earrings.

Hey, Johnny, maybe if you had gone and helped your son rather than spending the afternoon carefully waxing your mustache out to Kaiser Wilhelm-esque proportions, he wouldn’t be in this mess. Presumably Malotte père plans to punish the boy by tying him to a set of railroad tracks. 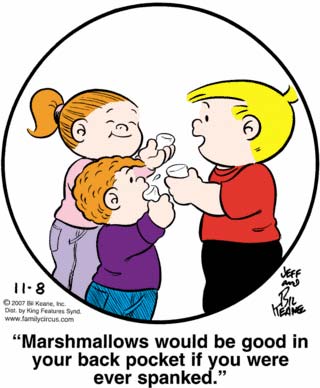 From: The Comics Curmudgeon
To: The Family Circus
Re: Today’s cartoon

Here is a (non-comprehensive) list of things I do not want to see or see discussed in any future installments of your feature:

I thank you for your time.

So, we can make jokes in the newspaper about babies urinating on people’s faces now? For real? Mavin’s smug facial expression really pushes this one over the edge for me. It’s like he’s saying “Oh yeah, dad, I’m going to piss all over your face. Yeah. It’s gonna be awesome.”