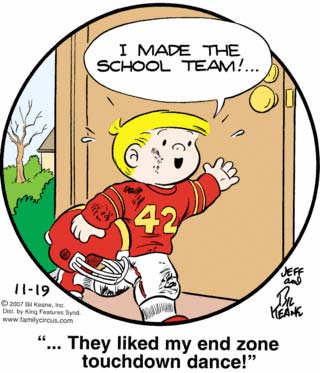 I’m not going to denigrate Billy’s school for letting him on the team based on the quality of his celebratory frolicking. After all, wasn’t the Ickey Shuffle pretty much the high point in the long and non-storied history of the Cincinnati Bengals franchise? The competition for ticket dollars among elementary school football programs is fierce, and so obviously each team will want to find the best showmen to keep the crowds coming back. No, what disturbs me is how dirty Billy is, which frankly doesn’t speak well for the aesthetic judgement of the coaches. I mean, what, did his “touchdown dance” consist of him rolling around in the dirt? Or did (God forbid) he attempt to breakdance? While I don’t doubt that our moronic little towhead might think that such pathetic displays might constitute a good signature celebration, I find it sad that they would earn him a spot on the team. This is why the athletic and drama departments really need to work together more closely.

Speaking of which, Cully seems to have come to Coach Thorp’s office directly from rehearsal for the school production of Dracula. “I’m no killer! I merely drain the blood I need for sustenance from the veins of my victims, transforming them into the living dead.”

Gil’s smug diagonal leaning pose (a common enough Gil Thorp visual trope; see for instance here and here) is all the more hilarious because his little head game is epically misguided and pointless, and certainly nothing to be proud of. “See, Cully, I told you — you’re no killer! You’re a bully who breaks into people’s houses to steal electronics, and you’ll probably be addicted to meth soon if you aren’t already. Now run along! Oh, and please kill Marty Moon. I’m serious.”

Ah, if there’s one thing that’s going defuse a violent situation and calm down a dude who’s got a gun out in his boat, it’s condescendingly tousling his hair, then pumping him full of caffeine. That’s just the sort of crowd control techniques you learn at Mountie Academy! Or forest ranger school. Or in basic training, preparing to go fight Fritz with General Pershing’s army. Seriously, who the hell is that guy supposed to be?

Make it stop, I’m begging you. Hey, remember when June went to the DMV! Ha ha, good times! Please. I … I won’t make fun of you any more. Just let up for a day or two. Please.

Also, fans of TDIET and/or toys will want to check out today’s Shortpacked!