Pity the poor Luann creative team! In the continuing slow evolution of the strip’s characters, they’ve hit upon a potential gold mind of potential wacky plots: two young men living together, one somewhat impressionable, one somewhat scheming. Normally, you could just lie back and let the hijinks happen. But this is a comic strip that runs in mainstream family newspapers, so all the topics that you’d think of using for this setup — getting girls pregnant, hard drugs, getting into fights, having sex with girls, marijuana, hard liquor, video games, kissing girls, beer, uncleanliness, having physical contact of any sort with girls — are apparently off limits. We’re instead left with TJ’s manic holiday decorating jones, which, while potentially mildly amusing, seems a wee bit out of touch. Couldn’t Santa’s arm fly off in front of some little kids who would then wet their pants in terror at the sight? Oops, pants-wetting: also off-limits, apparently.

This is presumably supposed to be some sort of wry social commentary about how the commercial exploitation of Christmas seems to begin earlier and earlier every year with the stores and the malls and the waddyagonnadoamiright?, but it seems perfectly reasonable to me that desperate food addict Dagwood Bumstead would be so in love with Thanksgiving, a holiday whose main ritual is gluttony, that he’d build a series of twisted idols to it. My only surprise is that the Thanksgiving tree isn’t being trimmed with real edible yams and turkey flesh, to be consumed once everything on the table has been crammed down Dagwood’s ravenous gullet. Elmo, who has long settled into the role of Dagwood’s enabler, wants to know how he can assist with the rampant food worship; only Daisy wordlessly questions the madness. 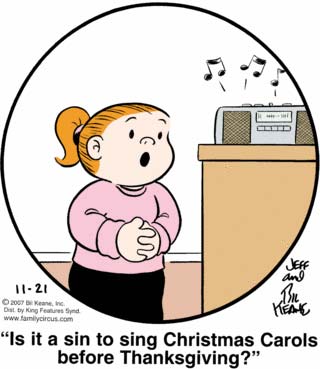 A good way to keep Dolly in line is to keep her ignorant of actual theology and just tell her that things that annoy you are sins that will damn her soul to hell for all eternity. Other sins in the Keane household: running in the house, staying up past eight o’clock, talking while mommy and daddy are trying to watch TV, and singing Christmas carols at any time.

“Wait a minute!” I’m sure you said when you saw Pluggers this morning. “Canada? They don’t have pluggers in Canada! How can pluggers live in the land of Hillarycare and a marriage between a dog-man and a rhino-man? Admittedly, this submission came not from the hot-shot big city of Toronto but rather from some little town called ‘Torono’ that I’ve never heard of, but still … Canada?” Well, fear not for your sense of sanity: Idris Mercer is actually faithful Comics Curmudgeon reader Skullturf Q. Beavispants! I actually remember him mentioning this as a potential Pluggers entry in the comments some months back; I’m sure he’s gratified to see his idea acted out by an obese, flannel-clad semihuman. Not that I don’t fully encourage all of you to keep sending your petty gripes to TDIET (and we have plenty coming up in the next couple of months) but the Pluggers code has been harder to crack, and we must salute Mr. Beavispants as a result.

Unlike those who had their entries employed by TDIET, Skullturf was not contacted and told that his idea would be run, nor was he sent a suitable-for-framing copy of the cartoon, because pluggers don’t expect or deserve that sort of consideration.