Good lord, didn’t we polish off this Randy-runs-for-judge storyline more than a year ago, when Randy’s opponent was revealed to have a alcoholic wife and to thus be unsuitable for the bench? Even presidential elections don’t drag out this long. Since then, Randy has clearly been zapped with some kind of dignifying ray, what with his more mature, slightly lined face and sudden penchant for vests. Apparently people don’t want their judges looking like twelve-year-olds.

Still, the fact that Randy’s campaign poster was printed over in “Parkersburg” reveals the Turkmenbashi-style cult of personality that the Parkers hold over this part of the country. With whole towns named after his family, it seems doubtful that anyone could keep Randy from the judgeship that’s been promised him since birth. Voters trudging to the polls under the watchful gaze of the forty-foot-tall golden statue of Judge Parker Senior will know what to do if they want to make it home alive.

Boy, ten years have sure allowed Mopey Pete to hone his lady-wooing prowess. Because if there’s one thing a woman looks for in a potential sexual partner, it’s a hand so cramped as to interfere with fine motor control skills. 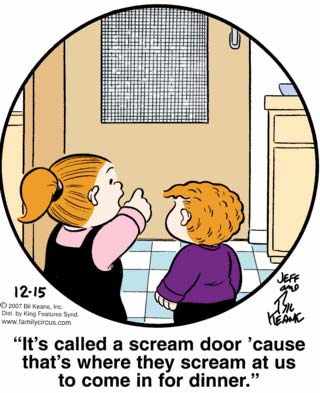 This comic probably would have been funnier (though not actually funny per se) if it had been published at some time other than the dead of winter. “It’s called the scream door because when they lock us outside in the snow, we scream through it begging for them to let us back in. Generally they can’t hear us, though, because the inside door is closed and they’re in the living room watching TV.” 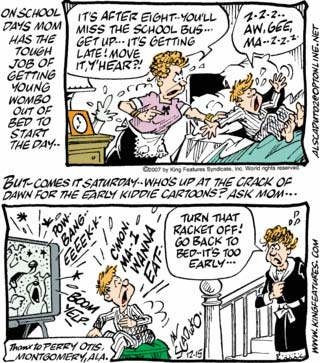 Another TDIET from a faithful reader! Today, the Great Ka-Floopa Gush reminds us of those halcyon days of youth, when institutionalized schooling was so dreadful that the sweet embrace of unconsciousness was preferable.