I think I’ve made it clear that I oppose the coloring of daily comics, especially when the artists aren’t the one making the color choices. It’s particularly bad when the strips are specifically created with coloring conventions that accommodate publication in black and white and then are colored in. One of the most disconcerting examples of this is when something in a strip is supposed to be red and is colored solid black in the black-and-white version. It makes total sense in a monochrome format, but once you add color into the mix, you get bizarre results like Hi and Lois’ S&M Valentine’s Day, or Dagwood the goth Santa. 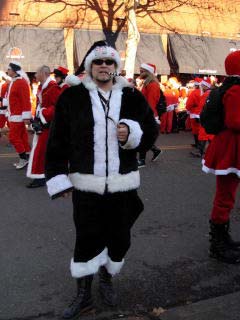 I should add that I only see Luann in black and white, and so black-suited Santas there seem totally reasonable to me. Dagwood’s hat, however, gives me the heebie-jeebies.

No one is ever, ever allowed to make fun of the art in Gil Thorp again. Ever. What other strip would aim so high as to give us triple-Bill punching action? I particularly like the way that that the lead Valley Tech Vandal’s omnipresent hat is blasted off his head by Bill’s very first punch, symbolically emasculating him. It’s unclear whether he’s holding his face in panel three because he’s bleeding everywhere or because he’s ashamed of being beaten up by a dude with one leg.

Meanwhile, Cully’s sad face in panel three indicates that he’s getting no joy from this savage beatdown. Either his time in prison has shown him that the turn to violence is never any kind of victory, or he’s disappointed that he didn’t get to break these guys in half himself with his “wrestling moves.”

“Well, you were wearin’ shorts and flip-flops, I should say. I was wearing the same damn outfit I have on now, just like I do every other day of my life.”

Pluggers know that a plastic sofa cover is a lot cheaper than fancy incontinence medication.