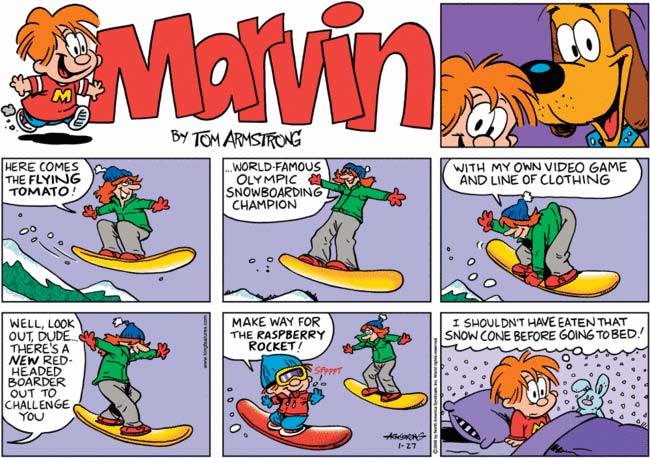 Non-redheaded persons who read this, heed my words! We redheaded folk may, as my hairdresser cheerfully informed me when I went to get a haircut last week, be going extinct, but like the mighty but doomed polar bear, we demand a certain degree of respect on the way out! For instance, in the matter of metaphorical color terms used to describe us, we are fine with the classic “redhead” or simply “red”; also acceptable are “ginger,” “rusty,” “strawberry blond” (for certain hues), and, if you’re feeling risque, “firecrotch.” “Raspberry” strikes me as a little off, and … tomato? Tomato? Please. Let’s never speak of this incident again.

Despite the totally radical and extreme dream-based snowboarding going on in most of this comic, due to its weird background the final panel is the only one in which it actually appears to be snowing. This implies that at some point in the middle of winter, Marvin’s parents put him and his bed outside while he was sleeping, a move that I very much approve of. Perhaps they chose to expose their child to the elements after one too many mornings waking up to the horrifying vision in the throwaway panel in the top row. 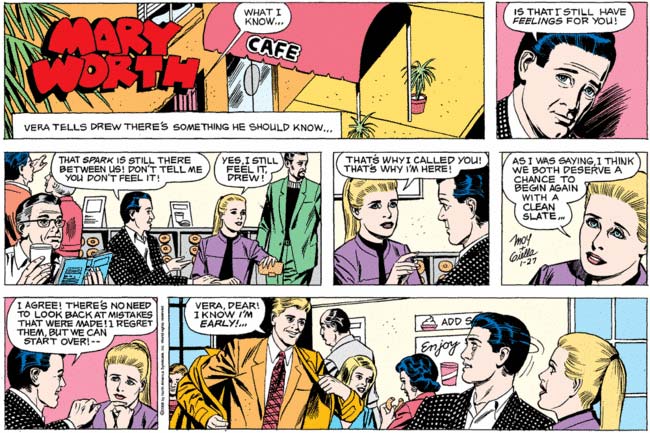 And Vera’s reign as the most normal person in the Drew-Dawn-Vera love triangle comes to an end … now. The weird generic blandness in the art here makes it unclear whether the clean-cut blondie in the final panel is supposed to be her brother Von or some new paramour, but either possibility is a weird enough choice for a get-together-with-an-old-flame meeting as to totally justify Dr. Drew’s epic head swivel in the final panel.

Turning to something with more personality than any of the humans in this scenario, let’s take a look at the sign being partially blocked by Drew’s brylcreemed noggin. I’m specifically intrigued by the top placard, which has a picture of some sort of white, foamy topping illustrating the exhortation to “ADD S[redacted]”. Since there’s enough room on the sign for one or two more letters, tops, and none of the synonyms for whipped cream that I can think of start with “S”, I’m kind of at a loss as to what it could be trying to tell us. My best guess: “ADD SIN”. Because whipped cream is sinfully delicious, you see! 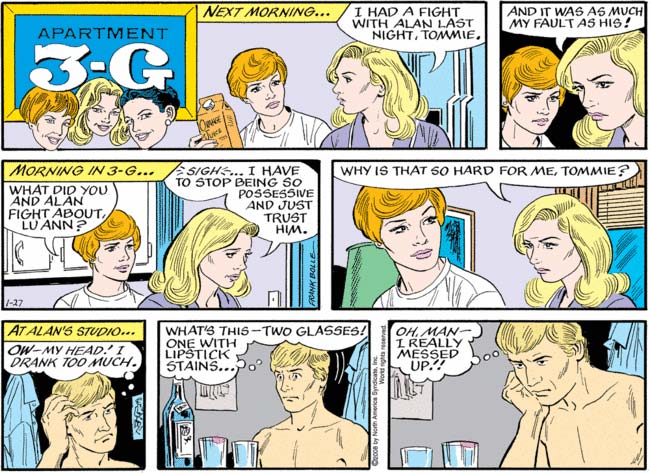 “God damn it, this is an autumn shade, and I know I’m a spring! How many times do I have to tell myself — I should never go to the cosmetics counter when I’m drunk or high!”

The final panel of this strip walks a delicate line, giving Alan fans the beefcake they crave while sparing the rest of us the traumatic sight of Alan nipples.