Continuing on my residual fumes of Curtis-directed niceness, I have to say that I find Chutney’s exaggerated body posture in panel two really adorable. Panel four, on the other hand, disturbs and horrifies me: Curtis’ mouth appears to be sliding around the side of his uncannily ovoid head! Perhaps his mind and heart have finally opened up to the possibility of smooches from Chutney, but his mouth still won’t have any of it and is trying to escape.

The current Gasoline Alley plot, involving people who have never appeared in the strip before, surreptitious phone camera photography, and numerous end-runs around the grievance procedure laid out in the collective bargaining agreement between the U.S. Postal Service and the American Postal Workers Union, is, as you might expect, meandering and dull. But I have to admit that I love love love the exchange in panel one today. Any and all questions lobbed at me that are even vaguely along the line of “You know what your trouble is?” will be met with “The system” — though ending not with some lily-livered question mark but a defiant exclamation point.

Mark Trail’s nemeses are in fact just flying around to get a better shot; the fact that Mark is severely overthinking their motivation just goes to show how dumb Mark Trail villains are. Mark’s contingency plan is of course foolproof, since any jurisdiction that would release a suspect with overwhelming evidence damning him as murderer based on outrageously unlikely hearsay from Mark would of course do the same if said outrageously unlikely hearsay was scrawled on a piece of paper attached to a dog that wandered into the police station.

Anyway, I’m mostly posting this because I wanted to share a couple funny graphics sent by faithful readers. First up is this note from faithful reader Daniel:

While my wife asked ‘What are you planning to do today?’ I came up with this. I think it’s the most productive ten minutes I’ve spent since getting laid off last week. I figured people could print this sign out, and place it in their car windows, or at least xerox a dozen fliers and post them in their neighborhood. People need to know the facts! 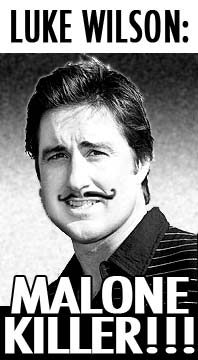 Ha ha, all fun and games — or so you think. But this note and pic, from faithful reader Gal Friday, will blow your mind!

As seen at Sundance!!! What does it mean?! 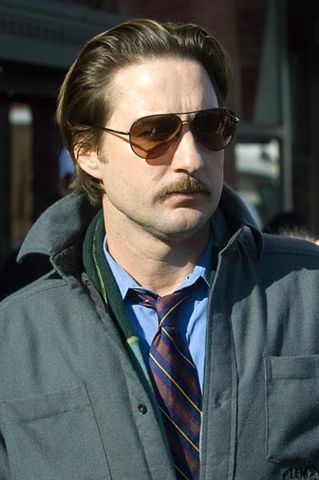 It means that folks on future Wes Anderson productions need to watch their backs, that’s what.

So it turns out that maybe Vera didn’t summon her ex-boyfriend to this hell cafe for the sole purpose of having her new boyfriend beat him up; rather, she’s just too lazy to make dates in separate restaurants with her various bits of emotional baggage. She also appears to have planned a two-plus hour lunch or something — I’m sure that goes over well with the head honchos at Disturbing Lack Of Affect Ad Agency. Anyway, Ryan’s bizarre way-too-early appearance, combined with his weird neck fondle in panel one, spells C-R-E-E-P-S-T-E-R to me. Or maybe V-A-M-P-I-R-E.

Of course, I’m less and less concerned about these boring humans and more and more interested in the bizarre series of identical bright orange donuts/bagels/round whatevers behind them. When we first saw these sweet (or possibly savory) treats, they at least had shelves to sit on. Today they appear to be simply glued to the back of the display case, or possibly nailed there. 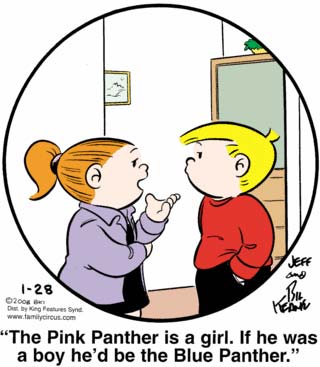 I was going to accuse Pluggers of just slapping a new caption on art first drawn for a submission from faithful reader gh, but a quick trip to my archives revealed that said panel actually featured an entirely different drawing of an entirely different human-animal hybrid species, albeit one also featuring polka-dot boxers and obesity. Turns out that the Pluggers creative team just likes drawing huge-gutted furries in their underwear. Who are we to judge?