I don’t want to come across as some kind of elitist food snob (and anyone who’s ever seen me cook and/or eat is no doubt enjoying a hearty laugh that I would ever have to preface anything I write with that sentence). But I have to say that Dagwood’s armful of foodstuffs doesn’t strike me as all that unhealthy. It’s hard to see at this resolution, but most of it appears to be the kind of fresh ingredients (including actual vegetables) of the sort that you’re really supposed to be eating, and not the boxed and/or frozen heavily processed and low-grade-corn-based stuff that most of us (myself included) actually eat. Who would have guessed that Dagwood’s love of food ran to quality, not just quantity?

Dagwood’s rejection of the modern industrial food chain might be a sign of a broader Luddism that has extended to more troubling dimensions, though. For instance, his insistence on carrying his bounty rather than putting it in a more convenient cart points to his rejection of that devil’s tool, the so-called “wheel.” Unrelated but also unsettling is the coloring error that rendered the word balloons in this strip an icy blue. As if today’s weather didn’t leave me cold enough!

As several faithful readers wrote me to point out, Grandpa Jim’s hand gesture in panel three is essentially the British version of giving someone the finger. While I’m not sure if the Brits left their rude hand signs in the Canadian psyche as a legacy of their Empire, it’s true that Grandpa spent most of WWII fixing up planes in the UK — plenty of time to learn how to flip off folks like a local. Once again, this poor man, trapped both in the half-responsive shell of his body and in the floundering final days of this comic strip, expresses what we’re all really feeling.

Dr. Drew manages to neatly combine surprise and smugness into one facial expression in panel two. “Ah, to be young and Drew Corey!” he seems to be thinking. “To be so gosh-darn irresistible that the ladies can’t even wait for you to sit down together before their need for your sweet young body becomes irresistible!” His narcissistic glow should last another five or ten seconds, until Vera starts eating his face. 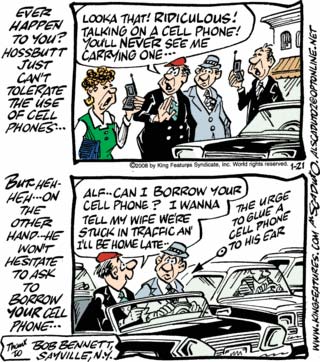 If my record-keeping is right, “Bob Bennett” is none other than faithful reader benro, and truly by now we should have come to expect that any TDIET that features newfangled advances like cell phones or e-mail would be from a Comics Curmudgeon reader. Cell phone glued to his ear or no, Hossbutt may have some problems hearing his wife when he calls her, considering that he and the nameless URGEd individual are apparently riding in a tiny, roofless go-cart in the middle of a multilane highway.

You’re a plugger if your intimate life becomes a terrifying Oedipal nightmare by the time you hit 45.