At last, the brownies’ “special” nature is explicitly acknowledged! Just what mind-expanding substance makes them “special” (complete with quotes) will no doubt be revealed in due time, which, since this is Judge Parker, means maybe by September. We know it’s good stuff, though, because in panel three Elvira appears to be so funky with ganja that she’s sporting visible odor lines, or perhaps her chemically altered brain is sending her down some kind of nightmare trip that’s beginning with her face melting and dissolving into the air. Normally I’d complain about the conversational discontinuity here — Elvira’s request that Biff respect neighborly etiquette and/or local general aviation regulations has little to do with her attempt to “turn on” the local squares — but these people are clearly so very high that we can’t expect them to make much sense. I’m looking forward to weeks of groovy psychedelia, Judge Parker style, which is to say that it will be slow, confusing, and ultimately frustrating, but there will be cleavage along the way.

The essential perversity of my entire blogging project can be summed up as follows: for the past four days, Rex Morgan, which I’ve ignored, has involved gunplay and our heroes fleeing into the woods in terror, whereas Apartment 3-G, which I’ve made sure to keep you current on, has involved boring people at a stupid New Year’s party. If you’re not down with that, then maybe the Comics Curmudgeon is not for you, my friend. Anyway, while we wait for Lu Ann’s inevitable discovery of Alan in the bathroom either shooting smack or offering to perform any number of unsavory acts in exchange for said smack, I want you to ponder this: of the 365 Apartment 3-G’s that were published in 2007, were there really not 13 or 14 that could have been combined, or perhaps even eliminated entirely, to so as to allow whatever Big Dramatic Moment is looming for midnight to happen in the strip actually published on December 31? 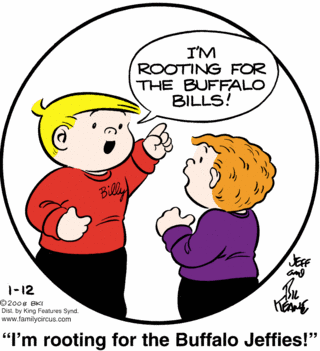 Billy! As a native of Buffalo, the Queen City of the Great Lakes, I was doomed from birth to always have an undying affection for and rooting interest in the Buffalo Bills, despite the fact that with each passing year they find a new and exciting way to tear out your heart and stomp on it with their cleat-clad feet. Do not voluntarily pledge your love to them based merely on a coincidental match-up of names (yours being scrawled on your shirt, lest we not get the joke)!

Jeffy! There’s no such thing as the “Buffalo Jeffies”, but you’re a moron and so we expect no better of you. Your stupidity has in fact made you so well known that you don’t need any label on your clothes. Here, have a cookie.

I have to say that I’m perturbed and unsettled by the verb tense in the first world balloon in this cartoon. “Did we ever argue like them” rather than “Do we ever” implies a certain temporal distance between the speaking couple and the ones being referenced. It would be understandable if the contentious pair in the background were a younger feller and his wife and the speaker were remarking ruefully on the tempestuous nature of early courtship among fiery rural folk, but the presence of long white beards on both men indicates that they have equal status as elders in this inbred hillbilly community. The only other scenario that makes sense to me is that the foregrounded couple are in fact dead and, like overall-clad semiliterate versions of the icy, reserved angels of Wim Wenders’ 1987 classic Wings of Desire, no longer argue about anything, but merely remark and observe. This would mean that they have been cursed by a vengeful God (who turns out to be some kind of liberal city slicker after all) to haunt the same chaw-stained shanty town where they spent their narrow, miserable lives rather than being permitted to enter the blessed afterlife.