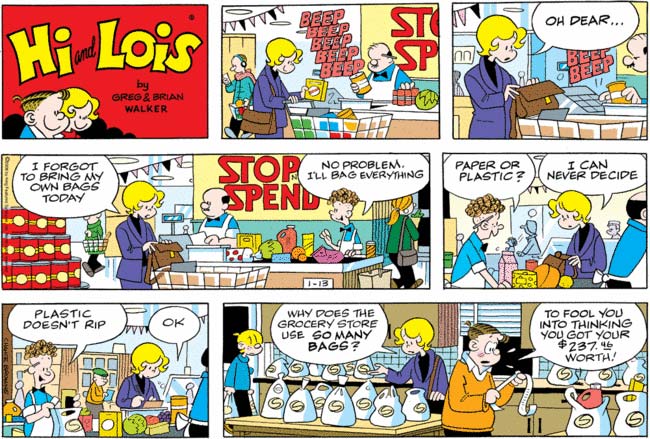 I’m not the kind of guy who’d fly into a pointless rage and rip into Hi and Lois … oh, no, wait, I double-checked and it turns out that’s exactly the kind of guy I am. Anyway, today’s Hi and Lois is even more pointless than usual. It is in fact the worst kind of Sunday strip: the kind that could have easily been a daily strip with three panels (specifically, the last three panels) or even one panel (specifically, the last one). Even without the two throwaway panels at the beginning, this pretty much has the vibe of a long boring story that Lois is telling that turns out not to have a point; add in panel one (red-hot UPC scanning action!) and two (Lois realizes she doesn’t have her eco-friendly reusable bags — what, does she usually carry them all in her purse?) and it becomes practically unbearable. For some reason, though, it’s panel five that really pushes me over the edge, and I want to isolate it to make my point:

See, if this were part of some meandering, slice-of-life graphic novel by Harvey Pekar or Daniel Clowes that ran to thirty or forty pages, it might be acceptable. But this is a Sunday Hi and Lois. It’s got six or seven panels to make its point, one of which taken up by the title. None of those panels should consist of a character making a statement of fact and another responding with a punctuation-less “OK”. C’mon, Hi and Lois, you’ve got places to be. 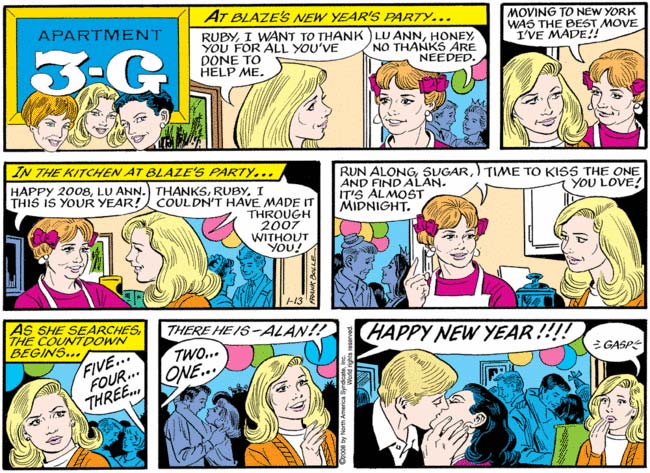 Speaking of long, boring stories that go nowhere, having subjected you to several utterly uneventful days of Apartment 3-G this week, I feel obligated to show one in which something actually happens — namely, the totally unforeseeable betrayal of Lu Ann. I’m sure Alan has a reasonable explanation for his behavior, like “I know she has heroin hidden in her teeth! I know it and I’m going to get it!” This is definitely going to be the most awkward art opening ever. 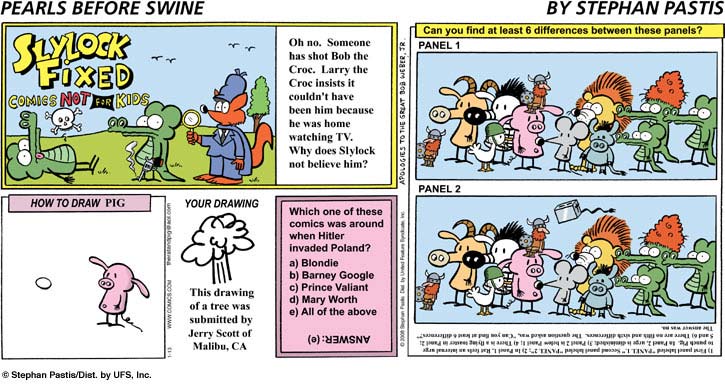 I don’t have much to say about this one other than to add to the chorus of approbation, but I thought those of you who don’t see the Sunday PBS would want to have a look. The answer to the six differences is particularly hilarious.