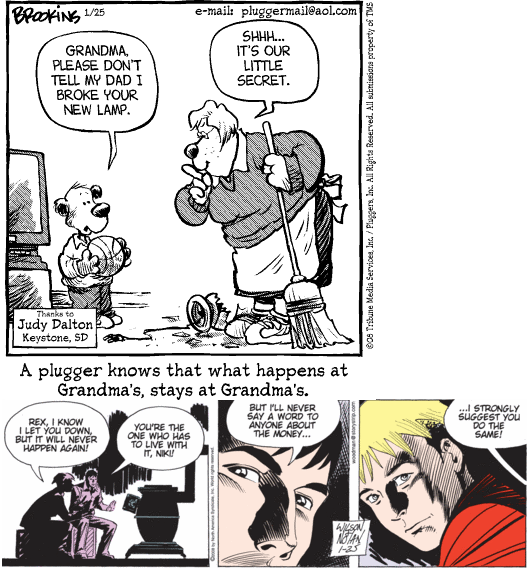 Oh poor little plugger! Oh poor little Niki! You both think that you’ve just gotten off the hook, but the truth is that you’ve been hooked, and now you’re being reeled in. Once someone in authority over you has that secret, they can hold it over your head at any time, and you can’t even imagine what you’ll end up doing to make sure that secret stays secret. In the plugger-spawn’s case, it’s probably relatively innocent stuff, like keeping the South Dakota state troopers none the wiser about Grandma’s illegal oxycontin distribution ring — “Now, your dad doesn’t need to know about all those people ringing the doorbell in the middle of the night, just like he doesn’t need to know about the lamp, right? Here, this grubby, wadded-up $20 bill will help you remember that.”

In Niki’s case, us filthy minded people are of course thinking of scenarios that are much more sordid, but more realistically I worry that the character is going to have pay for his transgression somehow. His initial crime against June was redeemed by his decision to go on the straight (ha ha) and narrow with Rex, but this — will he in the not so distant future have to take a bullet for his Big? Will he die for his own sins? Will he be all moodily lit as he is in this strip when it happens? Will Rex allow himself a guarded moment, remarking only that “there was something about him” before moving on? 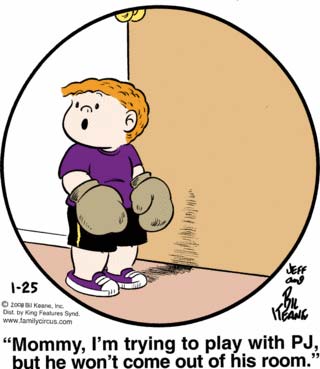 This comic is disturbing. As I think I’ve noted, I’m fully in favor of Keane-on-Keane violence, so I’m not put off by the notion of Jeffy waiting outside his pre-verbal little brother’s room, waiting to pulverize him with his new boxing gloves. No, it’s the gloves themselves that bother me; their weird potato-like lumpiness and dirt-brown color make me wonder if they actually aren’t boxing gloves at all, but rather burlap sacks Jeffy’s parents have thrown over his elephantiasis-stricken hands in lieu of actually taking him to some kind of expensive big-city doctor. And even in that case I’m not so much disturbed by the thought of Jeffy suffering from painful, swollen fingers as I am by the knowledge that eventually the sacks will fall off and I’ll actually have to see them.

I’ve remarked that Shoe sometimes seems to forget that it’s a strip about anthropomorphized birds; somewhat less often, Snuffy Smith seems to forget it’s a strip about hillbillies. I mean, I can understand why it forgets — if I had to churn out a horribly dated and vaguely offensive hillbilly joke every single day of my life, I’d probably develop a meth habit out of some combination of class solidarity, irony, self-loathing, and spite — but trying to glom it onto the traditional cartoonist “doctors sure love golf” joke, as in today’s strip, can produce baffling results. The attempt to render some kind of yokel golf attire for the doctor is bad enough, but why on earth are the ailin’ folks all standing around with their eyes closed? Is that supposed to be their angry face Are they afraid of being blinded with a golf ball? What?

Wow, so this has taken a turn for the significantly less sexy than I had hoped. Not that I couldn’t say that about every Apartment 3-G plotline ever, but still.

The backstory on Margo and her mother (and apologies to those who know this, but it’s the one sort of important bit of A3G lore that the strip just sort of assumes you know rather than hammering you over the head with the details over and over again) is that Margo’s dad was wealthy and married, and he knocked up his maid Gabriella and made her give up the resulting bastard spawn (our girl Margo) which he and his wife raised as their own. (I have to admit that I don’t know if said maid continued in the Magee family employ or not while Margo was a tyke.) Margo only found out about this as an adult, whereupon she cut off relations with her dad and the woman she had always thought of as her mother; however, she and Gabriella don’t have a really normal mother-daughter relationship for any number of obvious reasons, including Margo’s total inability to feel, and Margo traditionally just calls her Gabriella. I’m not sure why the temporary departure of her kind of dickish boyfriend has caused her to collapse into her mother’s arms while the trauma from her kidnapping and forcible enslavement was washed away by a nice hot bath. But I do know that if Gabriella has been praying to the Blessed Virgin to put Margo through something so painful that she calls her mother “mama”, she won’t be up for Secret Biological Mother Of The Year honors anytime soon.