The current Rex Morgan plotline got exciting some weeks back and, as is ever the case when that happens, I immediately lost interest. I discussed this phenomenon, which I call The Rex Morgan Problem, a while back, and here it comes around again just like clockwork. I think part of the problem is that “exciting” is really not something these strips do well. Ludicrous? Overwrought? Brimming with unspoken and petty resentments? Cryptohomoerotic? Yes, yes, yes, and you’d better believe that’s a yes. Exciting? Not so much.

Anyway, speaking of unspoken resentments, I do kind of love Niki’s expression in panel three. To quickly sum up several weeks of ostensibly exciting developments, Niki was briefly left alone in the cabin with one the escaped prisoners, who tried to relate to him as a fellow lowlife and offered him some stolen cash to switch sides; Niki refused because of his fear of letting Rex down. In today’s final panel, he looks to be contemplating the fact that right now he could be (a) warm, (b) dry, (c) rich, and (d) about to be embarking on an awesome cross-country crime spree instead of trudging through the dark, wet woods with a sullen and vaguely creepy doctor.

Speaking of non-exciting “excitement,” Spider-Man has actually toyed with superhero-on-villain action for the past few days. I refuse to label the Persuader a “supervillain” despite his descriptive one-word name, because he wears street clothes and his only “power” is his unusual stature; still, he’s proved more than a match for Spidey, escaping from his spiderwebs and failing to get in the way of the web-slinger’s wildly misdirected web-slinging. Maybe it’s time to admit that Peter Parker’s longstanding refusal to fight crime or even get off of the couch comes not from laziness or apathy but of a crippling fear of exactly this sort of inevitable failure and humiliation. The self-esteem issues that would naturally arise go a long way towards explaining his eternal passive-aggressive attitude towards any hint of his wife’s success. 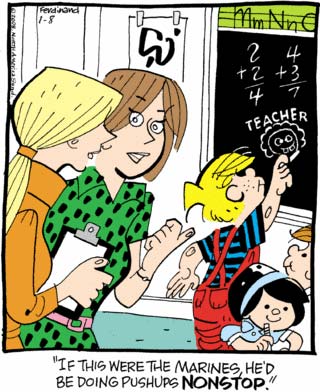 The teacher in green’s wide, crazy eyes are more terrifyingly menacing than anything Dennis has done in my lifetime. She looks like she’s about to go on a killing spree, and, even more troubling, that she’ll testify that Dennis’ fairly tame caricature spoke to her and told her which of her students should live and which should die.

“Frankly, it smacks of math. And the last thing I want my players wasting their time with is math. That’s why we have the poindexters who sit at the scorer’s table!”