That plane, for those of you not keeping up at home, is circling Mark because its passengers plan to kill him, and really, why wouldn’t they. Not only is he slowly making his way back to the nearby town that everyone keeps creepily referring to as “the community” (which makes it sound like some vaguely hippie-like cult compound) in order to drop a dime on the suddenly-not-dying-of-brain-cancer Luke Wilson, but he’s also annoying as hell, with his word balloon in panel two being representative of the sort of idiot patter he’s been keeping up for the benefit of nobody in particular. If Mark Trail were the sort of strip that provided animals with thought balloons, Andy’s would be saying “SHUT UP SHUT UP SHUT UP” right about now. He’ll no doubt come to Mark’s rescue anyway, but Luke Wilson’s henchmen (fun phrase you probably won’t see in People magazine anytime soon: “Luke Wilson’s henchmen”) would do well to try to make the enormous canine a better offer. Since we’ve had hints that their “hunting and fishing camp” is a cover operation for some kind of monstrous crime, perhaps Andy can be wooed with the promise of all the human flesh he can eat, starting with that of his erstwhile owner.

“…uh, who I just remembered has kind of a thing about remaining unknown! Don’t worry, girls, they’ll be able to identify your bodies from all the skull marks.”

Oh, Andrew! I know you’re no Clambake — you’re not even a self-clubbing Tyler — but I am beginning to fall for you a little bit. Look, he even refers to himself as “the A-Train” in his own internal monologue! Mercy.

I think the text in panel two was accidentally left in Narration Box Italic. It’s kind of surprising that the rigorous Gil Thorp quality control team didn’t catch that. 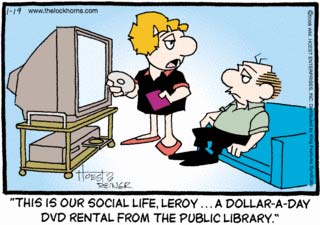 I’m not sure what’s sadder: that Leroy and Loretta’s social life is based around a dollar-a-day DVD rental from the public library, or that she thinks that a three-dollars-a-day DVD from Blockbuster would be a sign that they had finally arrived.