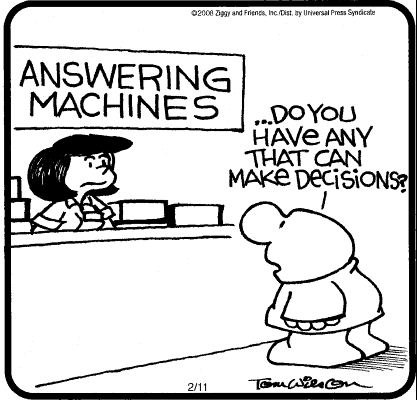 Every once in a while, something deeply strange and more than a little bit wonderful peeks out at you from the cracks in the tired old surface of a long-running comic strip. Today, Ziggy, having long failed in his quest to make human friends, and routinely mocked and derided by his own pets, is searching for companionship from a machine, which, he sadly believes, will be able to soothe his loneliness. But he’s not satisfied with the run-of-the-mill answering machines that merely record phone messages and play them back at the touch of a button; instead, he’s searching for an advanced model with basic decision-making abilities. In so doing, he touches on a philosophical dilemma that has troubled great thinkers for centuries: can truly rewarding affection come from an entity lacking free will? If Ziggy’s answering machine is forced by its programming to love him, can what it feels truly be said to be “love” at all, rather than mere slavish devotion? But, on the other hand, if the answering machine is allowed to decide on its own what to feel about Ziggy, won’t it respond with the same mixture of pity and disgust universally held by the service employees, animals, and newspaper readers who encounter him daily?

I was going to laugh mightily at Dick Tracy’s decision to make up, and then explain in a footnote, a completely nonexistent slang term for being nefariously rendered unconscious by a baddie with a roofie and/or a dart gun, but then I consulted Urban Dictionary and found that “smacked” can mean getting high from smoking marijuana or taking Ecstasy. While this doesn’t necessarily conflict with the narrator-supplied definition of “foreign substance in system,” it obviously puts an entirely different spin on the scenario: the problem is not so much a stealthy, sinister baddie willing to do anything to kidnap the Chief, but rather an out-of-control drug problem that’s affected even the police force’s most elite officers. Fortunately, once Chief Liz has been recovered, Dick Tracy will deal with the hippie slacker responsible, probably with the butt of his pistol.

OH SWEET SWEET SWEET lunging out of the mental hospital and into the third panel at a bizarre, inexplicable angle: it’s self-bashing Tyler! Who, uh, looks actually pretty much exactly like Andrew Gregory. Really, is there a Valley Conference rule that says that one spit-curled player must be on the court at all times?

Oh, man, no matter how often Spider-Man is felled by getting hit in the back of a head with a lead pipe with absolutely no warning from his spider-sense, it never gets old. Never.