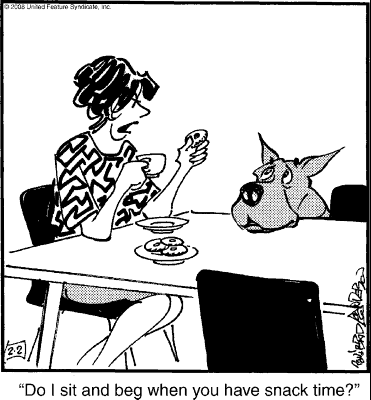 In the aftermath of the assassination of Julius Caesar, the great orator Cicero became the most important figure in the Roman Senate; after a brief period of political truce, he began a series of increasingly bitter public speeches against Marc Antony, Caesar’s political heir. While these speeches — the so-called Philippics — are regarded as masterpieces of oratory, they also goaded Antony so much that the fragile political peace that held in Rome collapsed; in the ensuing brief but nasty civil war, Cicero was captured and killed by one of Antony’s soldiers. His severed head and hands were displayed in the Roman forum, but legend has it that first Antony’s wife Fulvia berated his head and pricked his tongue with needles as revenge against the invective he had hurled against her husband.

This is a roundabout way of wondering why the hell we can see Marmaduke’s owner’s legs under the table but not Marmaduke’s. My guess is that the family has finally risen up against the tyrannical monster that has ruled their life for so long, and that the matriarch can now say everything she ever wanted to say while he was alive to his enormous, lifeless, detached skull.

I’m guessing Skyler is less than keen to hear about the young, vigorous body you once had, Perfesser. In fact, seeing as I’ve always pegged him as being somewhere in the 10 to 13 range, he probably is less than keen to get bedtime stories from you at all. However old he is, it’s good to see in panel three that he’s already mastered that heavy lidded, life-has-crushed me look that his uncle presents so regularly.

Since we only hear the beginning of this story, the mystery of what happened to Cosmo’s 28-inch waist will probably remain ever mysterious; I wonder if his reluctance to get out of his chair and actually walk to the child’s bedside to read his bedtime story is contributing factor to the loss of his slender middle or a result of the same.

Earlier this week, the Wizard of Id did a particularly egregious variation on its long-running “torture is hilarious” theme, but for some reason I found that less troubling than this strip, in which it’s posited that the best way to end poverty is to physically assault poor people. We can see the unconscious (or possibly lifeless) body of the medieval hobo in the background of panel three, so obviously our brave hero hasn’t taken things to the logical conclusion and eaten him.

Well, sure, dad, but you could be terrified and then crushed, which could cause permanent paralysis. Honestly, this is basic first aid that Brad should have learned in his fireman’s training.