Hi kids! This is Josh, back behind the wheel of the blog. Just wanted to thank Uncle Lumpy for his inimitable filling in (and, to reply to a few questions in the comments, I try to pay him, but he won’t let me!). Friday comics coming Friday, but a few random comics-related items of interest have come in that should be brought to your attention now!

We begin with our very first photo of Jungle Patrol-themed merchandise! Faithful reader Michele is proud to proclaim that lady cops and waitresses are in fact tougher than pirates, and indeed to prove it in this photo. Look at how cowed and nonthreatening that pirate looks at the mere sight of that fine t-shirt! 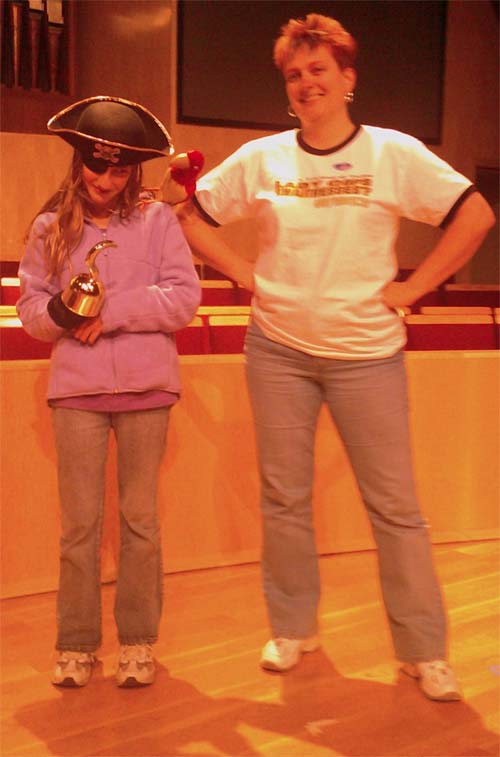 Also! The always awesome This Week In Milford blog alerts us to an exciting development! Comic artist Steve Bryant has a blog named Atomic Tiki Studio, on which he says that he recently tried out as the new artist for Gil Thorp. He didn’t get the gig, but this does reveal to the world that the syndicate is in the market for a new Gil Thorp artist — so, aspiring comic drawing-types, start your submissions! Bryant also posts some of his tryout strips, which are drawn based on scripts from the current A-Train story arc. Interesting to see the gang with an entirely different look, though Gil himself looks a little too meaty for my taste. Damn it, the man’s supposed to be defined by a series of impossible straight lines!

Also! A faithful reader deep within the Sanford Herald of North Carolina points me to a blog post from his boss about the trials and tribulations of attempting to add new comics to a newspaper. It’s pretty revelatory as to why exactly there’s so much legacy cruft out there.

Also! And finally! Another faithful reader sent me a link his own Apartment 3-G fan art. Yes, it’s safe for work, you sickos. Enjoy!