I suppose by “old college sweatshirt” Dagwood means “sweatshirt I wore when I was in college,” but when I think “college sweatshirt” I would visualize a sweatshirt that has, you know, a college’s logo or mascot on it, or at least its name. Then again, Dagwood went to college during the Harding Administration, when there were probably only about ten or twelve active universities in the United States, so maybe the colors were enough. Back then, the mere sight of a blue and black garment let you know that you were in the presence of a graduate of Dagwood’s esteemed alma mater. I’m sure he has many fond memories of rooting on The Stripes on the base-ball field.

You might recall that after the famed self-clubbing incident of early 2007, Tyler was banished to intensive psychiatric treatment. Obviously it worked like gangbusters. He’s gone all season without bludgeoning himself; and, what’s more, thanks to his new self-knowledge, he’s gained an almost uncanny insight into how the human psyche works. It’s almost as if he’s able to project himself out of his spit-curled head and into Andrew Gregory’s slightly longer spit-curled head. Gil and Kaz will be thankful for his help in this case, obviously, but may grow increasingly nervous about just what kind of mind-reading monster they’ve created. 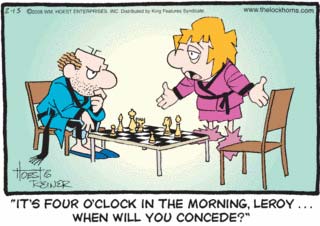 The Lockhorns schtick is generally not difficult to wrap one’s head around — they hate each other, you see — so the occasional panel composed of complete nonsense is all the more surprising. Who exactly is Leroy playing chess against? Why are all the pieces the same color? Why does Loretta’s “sleepy eyes” face look exactly like her “black eyes from getting in a car wreck” face? And how does it all fit in with their endless attempts to destroy one another, as everything inevitably does?

This may be the greatest ever Mark Trail that doesn’t actually feature Mark punching anybody. At last, we get to see a bear dish out the punishment and hostility, though alas some kind of syndicate rule seems to forbid the depiction of the Neanderthal henchman being eviscerated, so we instead need to settle for the sight of him fleeing in terror unrealistically quickly. I do like the fact that the widow Malone seems to merely stand around arching her eyebrows sexily while her muscle is nearly mauled. “Sorry, the bullets in this rifle are only for the elimination of one Mark Trail, not for some great furry beast. Perhaps you should have made use of your own weapon rather than casting it aside and screaming ‘AHHHH..’, you bearded cretin!”