Kudos to the AJGLU 3000 for not forcing the narrative in the first panel. The mere sight of the “Help Wanted” sign in Pop’s window is much subtler than what I’d have expected, which would have been Jughead staring at the “Help Wanted” sign while a light bulb (possibly hamburger shaped) went off over his head. Kudos too to our bleeping funny-bot for recognizing that the search for employment isn’t some smooth operation of soulless economic actors, but is rather layered with sarcasm and class-based resentment. Either that, or the AJGLU 3000 really thinks that hamburgers are a valid form of payment.

Crankshaft’s daughter and son-in-law are discussing the fact that their son — who is in his late teens or early 20s, and who I’m pretty sure is gainfully employed in some capacity — has decided to move into his own place. Naturally, their bleak, ashen faces in panel two make it look like he’s decided to sign up to be a suicide bomber — naturally, because this is the Funkiverse, where every little seemingly innocent decision has some kind of tragic downside, even if you can’t see it just yet.

When Margo hears “monastery,” she’s naturally anxious that her man might have done something terrible, like taking a vow of chastity or, worse, poverty. Obedience she could probably live with.

As young Mary prepares to fake her way through grace, we learn that her upbringing wasn’t just materially deprived — it was also spiritually empty! I know I should have long given up hope for this flashback sequence, but I admit to being excited to see just what life-changing event Mary is going to experience. Will she begin to speak in tongues, with “tongues” here meaning “bland platitudes”? Or will Cathy’s family’s prayer invoke the Holy Virgin Mary, and young Miss Worth will suddenly be filled with a new sense of her own power, as only she will be intercede for us at the hour of our death? 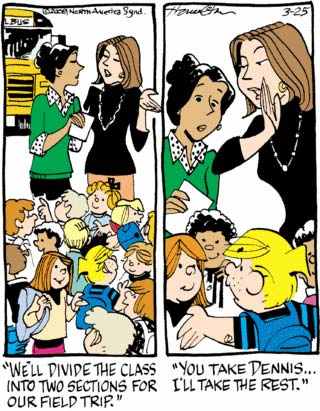 Ha ha! Dennis’s “field trip” is going to involve a lead pipe, a burlap sack, and a fast-moving river.