Today’s comics contained something that we all should have expected, but that was nevertheless shocking and, to some, horrifying. Certainly everyone who loves newspaper comics strip is buzzing about it. I’m talking, of course, about today’s Snuffy Smith.

Fellas! Of course, we all long to see our inamoratas in the super-classy see-through nighties of the kind found in mail-order catalogs and the Fredrick’s of Hollywood store. They’re hot because you can see your partner’s boobies but she’s still wearing clothes! But isn’t there something that isn’t quite perfect about those garments? Of course there is! They’ve been stitched together from some kind of non-edible artificial fiber, when they could be made out of delicious meat!

Seriously, this is one of the vilest things I’ve ever seen or read.

Oh, also, Liz and Anthony are going to get married or whatever. You might think that this foobrosal (in the lovely formulation of faithful reader Gabe) is a bit lackluster; indeed the first three panels seem to merely depict two numb characters recognizing that the machinations of their universe are pushing them inexorably together, and that no free will they exercise could possibly change their preordained fate. But in panel four, said Foobiverse suddenly remembers that Liz is supposed to be happy about this, and you see her eyes glowing with some kind of creepy, supernatural illumination. Then she desperately tries to get Anthony to nuzzle her breasts. It won’t be the first time she fails.

Mary Worth’s flashback is finally underway, and we learn that Mary is totally OK with throwing around terms like “broken home” in 2008. We also learn that she was a hungry, hungry little urchin with a terrible haircut. Will this sequence end with young Mary in a back alley somewhere, desperately chewing on the bones of a stray dog that she killed with her bare hands? We can only hope!

Speaking of eating dogs, Mark Trail has apparently travelled to the big bad city with an agenda of handing out free puppies to eight-year-olds. I’m guessing that the sort of little kid who would write a passionate entry about pet ownership for a contest is exactly the sort of little kid whose parents won’t let have a dog. I sure can’t see anything going wrong this this plan! Also, since the magazine Mark writes for is named Woods and Wildlife and not Domesticated Animals, I’m hoping the “puppy” will actually be a wolf cub, or maybe a coyote pup.

This could be some sort of vaguely daring attempt to make a totally colorless supporting character in this comic gay; on the other hand, since he’s using the vague term “friend” and the battalion captain is bringing his sister, I suppose Tony really could be just his friend because, hey, they’re modern, sensitive new-age guys, and Tony always wanted to see what a real firefighter’s ball was like (and who wouldn’t)? Or, since Brad couldn’t tell “i” from “y” in speech, Tony Gale could really be Toni Gale anyway. I could get further into this, but I just realized that no matter how much I think about it, it isn’t going to get any more interesting, so I’ll stop. 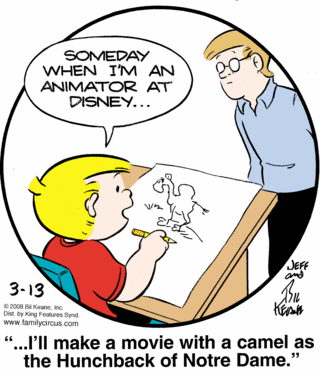 For those of you not up on the Shakespearean family drama beneath the surface of the Family Circus (and really, why would you be), Billy is actually based on strip creator Bil Keane’s son Glen, who is in fact an animator at Disney today; Jeffy is based on Jeff Keane, who has taken over the Family Circus from his dad. You could see this is some sort of dig at Glen for being a moron, but really a better way to go about that would have been something like, “Someday when I’m an animator at Disney, I’m going to help make a movie that will lose more than $100 million!”

UPDATE: Going over comments from the last thread, I see that the Spectacular Spider-Brick beat me to the “Foobocalypse now” joke … so a hat tip to the SSB as well!