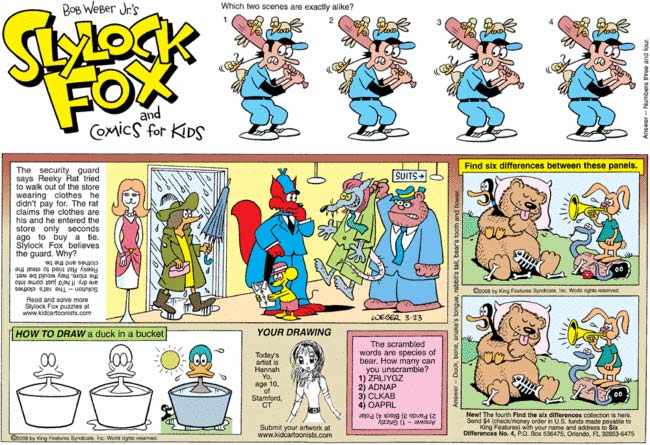 So many good things are going on in Sunday’s Slylock Fox! First of all, it features my new favorite anti-hero Reeky Rat, trying to move up the social ladder but so ignorant that he thinks that stealing a nice suit will make him respectable automatically. As usual for Sunday, the solution to the mystery is too small for me to read; I’m guessing it’s supposed to be something about how the suit would be wet if Reeky had worn it in from outside, but really, the tip-off that he’s lying about it being his suit is that Reeky Rat doesn’t own any God-damned suits. His wardrobe consists entirely of stained t-shirts he shoplifted from the Goodwill.

Also charming are the plight of the Six Differences duck, trapped in the paws of a sleeping bear; a trumpet-playing rabbit thinks that startling the bear awake will free his feathered friend, but it will likely just get both of them eaten. Speaking of ducks, “how to draw” teaches the youth of today to draw a duck in a bucket, because really, why not? I can see that being an important part of any graphic novel you have planned. And, finally, it looks like our unfortunate baseball player is about to be eaten alive by birds in part of the worldwide animal revolt we’ve already seen brewing.

I just wanted to point out to everyone the extent to which Judge Parker is the King Of Not Moving Things Along: Biff Dickens buzzed the horses yesterday? Yesterday was sometime around Thanksgiving. And this is positively breakneck speed for this feature.

Mary’s big flashback continues to be lame and anticlimactic, but this pair of throwaway panels pretty much epitomizes the strip: a baffling and dubious traditional proverb from a random country, and then Mary talking over whatever her interlocutor was trying to get in edgewise to move the conversation back to her.