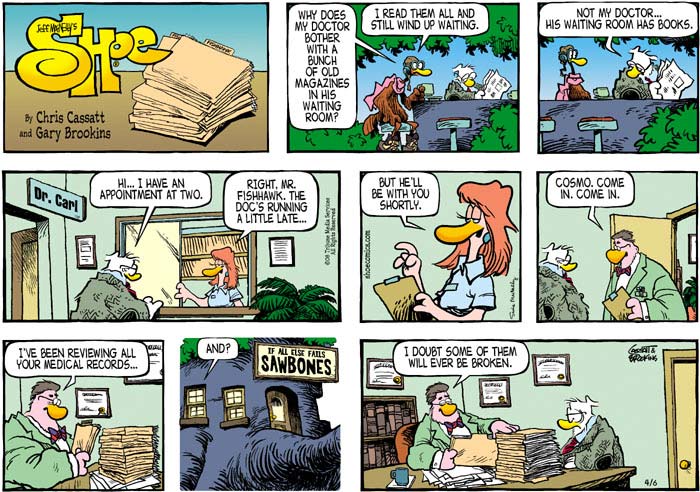 And this week’s award for the most egregious waste of Sunday comic space goes to … today’s Shoe! In fact, this Sunday strip contains two separate bits that would make perfectly serviceable daily strips (and since this is Shoe, by “perfectly serviceable” I mean “composed of mildly joke-like material”). Panels two and three in the first row and panels one and three of the bottom row are self-contained and even mildly funny. Panel two of the bottom row at least contains the mildly amusing sign “If All Else Fails Sawbones”. The middle row, in contrast, contains no jokes, no setups for jokes, and no cute details worth looking at. They are a slap in the face of everyone who ever aspires to occupy one of the precious square inches of the comics page, because they basically say, “Ha ha! We’re Shoe, we’re never going away, and we don’t have to care.”

Today’s Crankshaft similarly crams multiple jokes into a single strip, but at least they all get to the heart of the feature’s archetypical concerns: 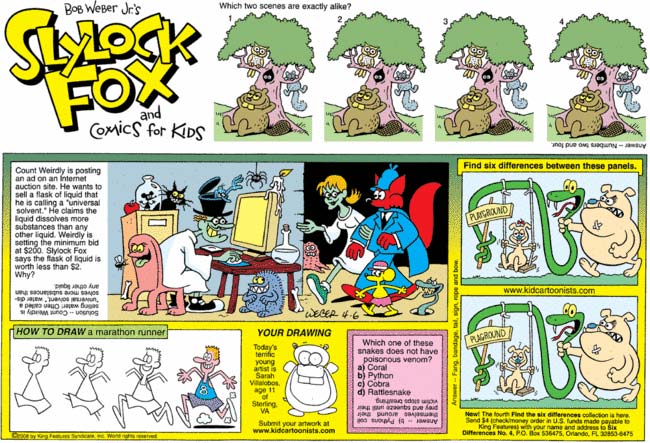 Wow, eBay scams? That doesn’t really strike me as Count Weirdly’s style. Usually he likes to harass his victims in person, presumably so he can giggle with girlish glee at their annoyance. The saddest thing about today’s strip is not that Slylock’s constant harassment has forced the poor Count to turn to cybercrime to get his kicks, but that this is the first time we’ve seen what appears to be Countess Weirdly, or maybe his mistress, or sister — or, anyway, a She-Weirdly of some kind — and she’s leading Slylock arm-in-arm to the scene of the crime. “Yes, officer, here he is! Now lock him away so this castle and its army of freaky critters will be mine, all mine! MUHAHAHAHA! Wait, did I say that last part aloud?”

That beaver in the “which two scenes are alike” puzzle is the smuggest rodent I’ve ever seen in my life. Meanwhile, the one submitted to the “your drawing” feature looks like it’s at the tail end of some kind of weeks-long mescaline binge.