Many have complained that Chief Liz has been relegated to the typical hapless female victim role in the current insane Dick Tracy storyline, despite being, you know, the actual chief of police. Today, she gamely tries her hand at Tracy-style crime fighting by attempting to actually rip the villain’s face off of the front of his skull. She is soon neutralized by a well-place elbow to the chin, but, hey, points for giving it a go.

Liz needs to take some tips from our lady cop/waitress pair if she really wants to know how to take down a baddie, though: pump hot lead into him, then taunt him as he lies bleeding at your feet. The Ghost Who Only Hires Sadists has a slight smile, indicating that Kay and Hawa have at last passed the callousness threshold needed to enter the Jungle Patrol. 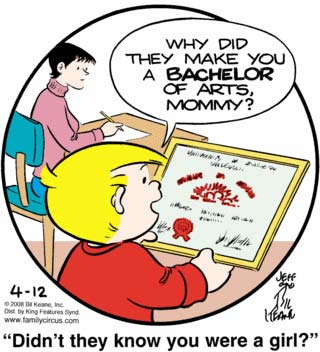 “Didn’t they know you were a girl, and thus should only have been educated to the extent necessary for child-rearing and food preparation?”

And a couple of fun panels for you: 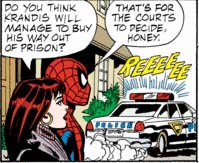 I wish we could get to see the proceedings of New York State Superior Court, Bribery Division, in which a jury will determine if Simon Krandis can, in fact, buy his way out of prison. Certainly it would be more interesting than the three weeks of Peter Parker whining and watching TV that we’re actually going to get.

Among the small but very enthusiastic group holding a pretty specific fetish, today will go down in history as The Day June Morgan Ate A Cheeseburger With Her Big Sexy Teeth. Rex looks miffed that nobody wants to see a close-up of him pecking away at his spinach salad.