Wait, sneaking it in? But … but that’s a medicinal puppy!

As usual, there’s so much wrong happening in this Mark Trail storyline denouement that it makes my little brain hurt. First of all, we’ve seen no indication that Mark has done anything about the sinister dognappers other than punch one of them. Despite what a casual reading of this strip may lead you to believe, Mark is not an officer of the law, and his fists are not legally sanctioned punishments for crimes. Are we seriously to believe that the Bonnie and Clyde of pet-stealing, having discovered how darn easy it is make money through from softhearted dog owners through their nefarious machinations, are just going to give it up because of a little chin music from Mark? Surely they’re just going to head over to another town and start anew! The least Mark could have done is liberate their female dog, who is an unwitting accomplice to their crimes and little better than a sex slave.

Then there’s the puppy-concealment going on in panel three. At least Mark isn’t just brazenly walking into a hospital with a bear, as he did during the Buck and Molly storyline, but since we can see clearly that Mark has washboard abs and a relatively form-fitting shirt, surely there will be someone observant enough to notice the squirming, mewling lump on our hero’s abdomen. I also question whether telling a happy, playful puppy in English to be quiet will really be all that effective. Hopefully Mark will be smart enough not to resort to more drastic measures; if you think little Madeline is sad now, wait until Mark shows her the puppy that he accidentally smothered.

Herb and Jamaal’s Hip Young Clergyman With An Earring was introduced a while back as an assistant to Rev. Croom, sent by the higher-ups to try to keep church relevant to the youth of today. Today we see that he’s also taken on the role of Christianity’s enforcer, popping out of nowhere whenever some weirdo religion is mentioned. “Hey, you know who’s a wise spiritual leader? Jesus. Now get yourselves to church, you hell-bound hippies.”

Boy, Branden and Elmer sure are looking cozy for two totally-not-at-all-dating BFFs. With the music on the boom box right and the light from the Chinese lanterns low at Maureen’s party, I predict two words (in English) that will end up solving Elmer’s little immigration status problem: shotgun wedding. 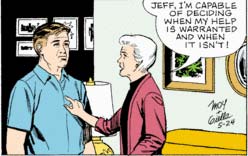