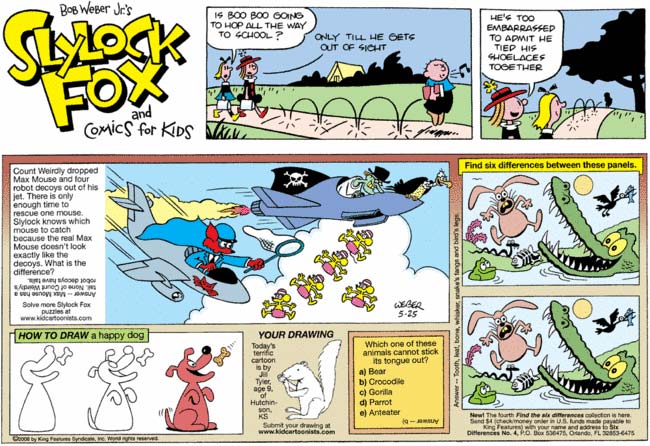 At last, Count Weirdly has hit upon a sinister plan that’s actually sinister, not just irritating: dropping Max and a bevy of decoy robo-Maxes out of the bomb bay of his WeirdlyJet! I don’t even want to imagine the dumber-vs.-dumbest adventure that must have led up to Max’s capture. Fortunately, Weirdly has forgotten the tails on his Maxdroids, because otherwise they are identical to the real thing in every respect — including their no doubt helpless mewling as they plummet to their deaths, and bowler hats that remain firmly in place, in violation of the laws of physics.

The sickest part, for me, is the vulture sitting on the WeirdlyJet’s nose, presumably waiting for Max to hit the ground with a splat so he can enjoy some lunch.

Meanwhile, over in the Six Differences, I like the happy expression on the frog’s face, as he silently salutes his crocodile brother, striking a blow for cold-blooded creatures against their mammalian oppressors. 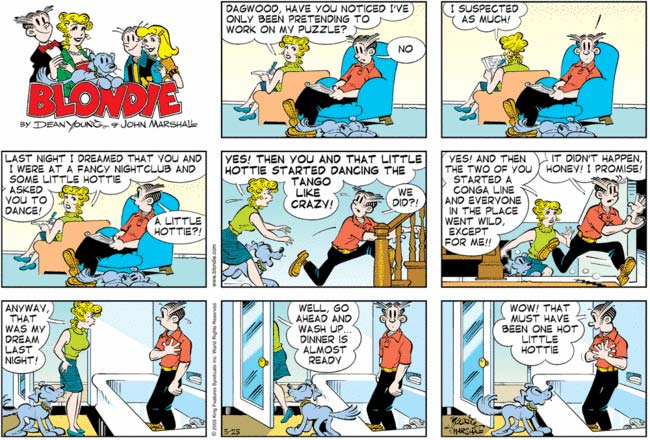 I’m kind of charmed by Dagwood’s terrified retreat that finally leaves him standing in the empty bathtub, his last place of refuge (occasional incursions from his boss notwithstanding). I also like the fact that Daisy has followed the bickering couple upstairs, wearing a terrified expression that says “Why are male-person-who-feeds-me and female-person-who-feeds-me fighting? Why? Will this affect the frequency with which I’m fed?” 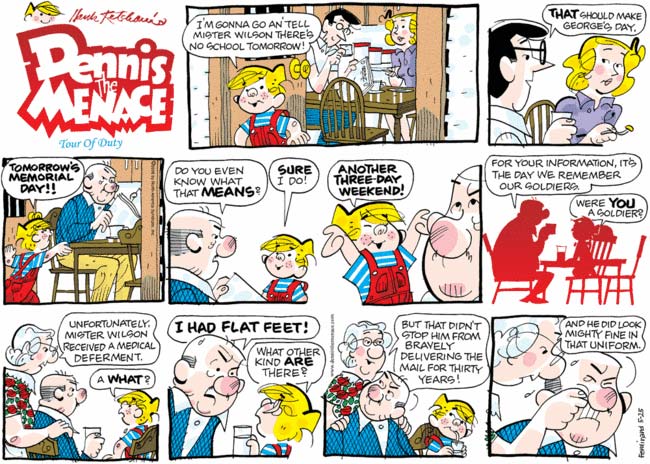 Gee, when it comes to questions about his past military service, Mr. Wilson seems to be protesting a little too much, complete with his trademarked creepy single bead of sweat. Is it possible that this whole “flat feet” story is just a front (after all, he did walk a mail route for thirty years) and that George Wilson was just too much of a coward to fight the Nazis/the Hun/the Spanish Menace/however the hell old he’s supposed to be?

My, the shape of Ted’s squirt gun certainly is … suggestive.