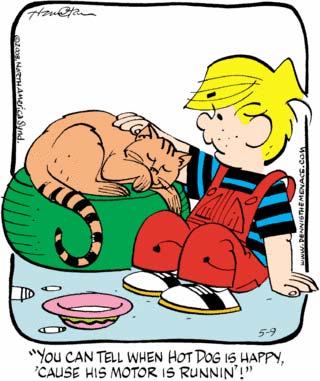 Dennis, you little devil! See, Dennis gave milk to Hot Dog without asking his parents, and it got splashed all over the carpet, and it’ll be impossible to get it out, and once it spoils, the living room is going to REEK! Ha ha! SO MENACING!

OK, no, there’s no way to get any menace out of this. Seriously, he’s making an adorable statement about a purring kitty-cat. At this point, he’s out-Jeffying Jeffy. 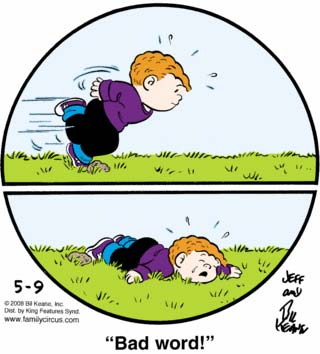 Case in point. At least this panel has taken the crowd-pleasing step of showing us Jeffy being grievously injured.

What is Alan smoking? I mean this question quite literally. “Pipe” plus “rock” equals “crack,” obviously, but the lingo has been inconsistent enough that I’m still holding out for heroin, which you can in fact smoke from a pipe if you’re a-scared of needles. I’m not sure why I’m rooting for the horse; maybe it’s an act of local pride (Baltimore being something of a heroin town), or maybe because being a junkie has a bit more old-school charm than being a crackhead. I’m certainly hoping that all this fuss isn’t over marijuana (OH MY GOD AN ARTIST SMOKES POT WHO WOULD HAVE EVER THOUGHT?).

I do like the mournful, baffled way in which Alan is regarding his toothbrush in panel two. “Wait, is this my pipe? Oh, God, I’m so [APPROPRIATE SLANG TERM] on [DRUG]!”

Jamaal and Yolanda have carried mutual but unrequited torches for each other for pretty much the whole time I’ve been reading this strip. They’re like the Mulder and Scully of mediocre comic strips that nobody really reads. That’s the context for the first panel, which must surely count as the most awkward attempt to shift gears from friendship to romance in the history of human interaction. Of course, it quickly descends into madness, with Yolanda replying in a manner that no human being would, ever, just to set up a deeply lame joke, but I still can’t get past Jamaal’s super-smooth technique. What if she had taken it more positively? What would his next move had been? “How do you feel about friends kissing with tongues? How do you feel about one friend’s penis kissing another friend’s vagina?”

“Yeah, you know, they do something really mundane, like rescue the police force’s two top officers with a 900-year-old weapon while an entire SWAT team is held at bay, and then stand around all needy, like they want a medal or something. Get a life, loser!”

In other news: Comic Sans has been banished! Huzzah!