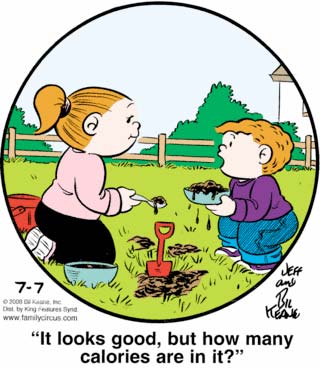 The Family Circus has a long list of crimes that it will eventually have to answer for, but I’m hard-pressed to remember any of its offerings being as visually unappealing as today’s. Faithful reader Dean Booth has already taken things to their logical and repulsive conclusion (warning: very very very gross), so I’ll just point out that in the middle of this filth-eating mess, Jeffy appears to be concerned about his girlish figure. I was going to chalk this up to unrealistic body image propaganda coming from the media, but then I got a look at his disproportionately large ass. Dolly is kneeling, but Jeffy appears to be able to just about put his feet and his butt on the ground simultaneously. It almost looks like he’s wearing the bottom half of a fat suit, or, perhaps more realistically, like he was assembled from various mismatched parts.

(I wrote that last sentence intending to mean that this particular drawing of Jeffy might have been assembled from bits of other drawings, obviously, but I do admit that the idea of the middle Keane boy actually being an unnaturally reanimated collection of corpse parts robbed from the local morgue is deeply pleasing to me.)

I like the way Connie appears to be leaning as far away from Jeremy as she can get and still stay in the frame in panel three. It’s like she’s suddenly been forced to visualize her teenage son getting “hands-on learning” from Mrs. Graworski, his biology teacher, and her skull is involuntarily attempting to flee from the source of the offending image.

Pluggers so enjoy rubbing their carnivorous habits in the face of tree-hugging hippies that they’re willing to pretend to believe in evolution to make their point.