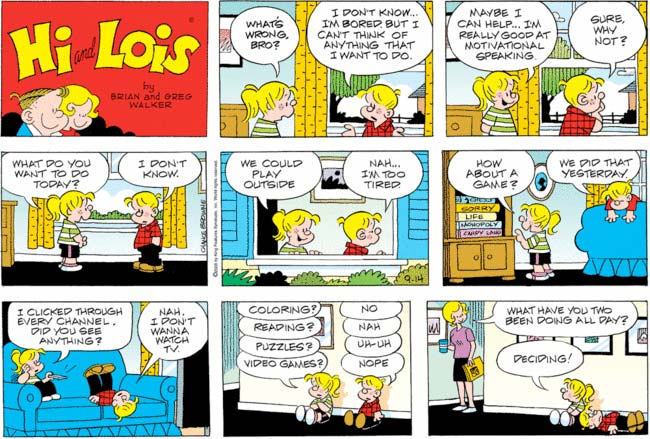 Here’s a rare case of a Sunday strip being radically altered by the presence or absence of the throwaway panels in the top row of the comic. If, like me as I read my physical dead-tree comic section, you saw the strip beginning with Dot asking Ditto “What do you want to do today?” you get a fairly pedestrian parable about young boredom. But with those first two panels, the strip suddenly stands at one step removed, with Dot setting her Dale Carnegie-like powers of persuasion against Ditto’s persistent and chronic ennui. Dot isn’t trying to have fun with her brother; she’s set herself up in mortal combat with his own shapeless self, trying — and, as you can see by Ditto’s state at the end of the strip, supine and refusing even to move, failing — to mold her brother into a man of some semblance of action.

Much as I enjoy the thought of Crankshaft spending a week alone stewing in his own old-man filth, I must object to his barber’s use of the neologism “batching it” in the third panel. I’m assuming the terms derives from the word “bachelor,” but I fear that it may also somehow involve Crankshaft’s batch.

And here’s a couple of amusing out-of-context-panels for you:

This is a charming and whimsical scene, as Corporal Yo regresses into nonsense child-talk as he drifts aimlessly through the sky.

This is funny because it makes it look like Dagwood is paying for sex.