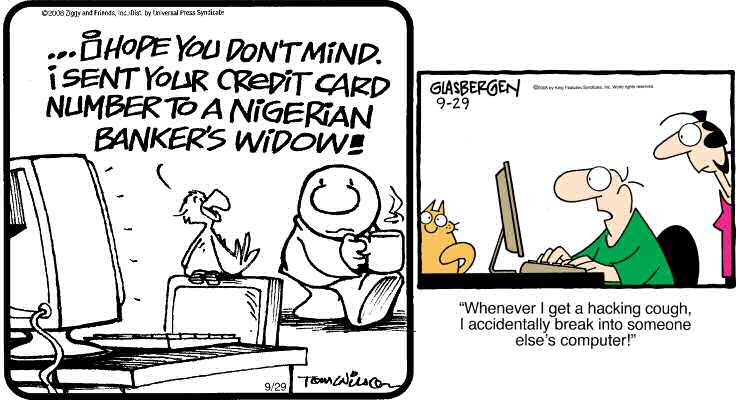 Cartoonists have always known that technology is funny all by itself, so there’s no need for frills like an actual joke — perfect for a lazy Monday! I’m sure that when the inscriptions at Lascaux are finally translated from the proto-Gallic, at least one will read, “OMG — TEH FIREZ! TEH SPEARZ! ROFLMAO”!

Hey, it’s really Alan, and he’s not only merely dead, he’s really most sincerely dead! That means something actually happened in slow-as-molasses Apartment 3G — mere weeks after Dewey Cheatham bought the farm in that Sultan of Stasis, Judge Parker. Maybe the authors finally gave up trying to spin their characters’ endless chattering into some kind of plot and rose up like Gary Larson’s vulture to proclaim, “I’m tired of waiting — let’s kill something!” We can only hope.

No such risk here! After endless weeks of first the bank’s and then victim-turned-consultant Terry Bryson’s attempts to calm Toby down after her non-crisis, Mary now asks for a (doubtless week-long) recap of the non-events. You can tell Toby’s learned her lesson, though. From the steely glint in her eye and the firm set of her chin, you know she’s headed right back to enormoushop.com to download that “Safety Cats” security screensaver before this nightmare can happen again!

I’m sitting in for Josh this week — you can reach me for site-related issues like server problems or comments caught in the spam filter at bio@jfruh.com, which forwards to me for the duration. If you need to reach Josh personally, use jfruh@jfruh.com, but expect delays.