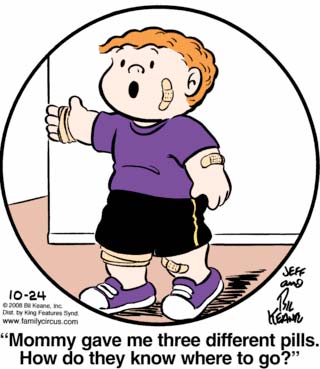 So, the constant mental and emotional abuse of Jeffy has been a long-standing theme of this strip, but it’s becoming increasingly clear that his physical abuse is starting to come to the fore. Attempts to shut him up by doping him up — “Mommy says that if I take all these pills, I won’t feel anything anymore!” — are doomed to failure, as nothing can stop Jeffy’s relentlessly adorable malapropisms. This thing’s only going to get uglier, with either Ma and Pa Keane dragged off to jail, or Jeffy burning the house down, then blaming his vengeance on “Ida Know”.

Having been browbeaten by Mary into not visiting his beloved son Drew in Vietnam (where, I might add, Drew is doing the charity work that his father wants to be doing), Dr. Jeff is trying to salvage some pretense of autonomy by blaming his homebody ways on his bad knees, which I’m reasonably sure have never once been mentioned in this strip to this point (though there is a cane floating aimlessly next to him in panel one). Mary then mocks him by claiming that going through airport security is just sooooo irritating; it’s almost as bad as having pretend knee arthritis! The truth is that kindly old lady Mary always breezes through the security lines, with the TSA none the wiser about all the heroin she keeps tucked into the waistband of her support hose.

Noooo Margo, you’re beginning to feel empathy for another human being! Admittedly, it’s a dead human being, but that’s how it starts. You need to gulp down some of that ink-black soul-destroying devil’s milk, before it’s too late!

This is today’s Shoe. It’s about urinating on things!