I cannot believe that I was taken so completely aback by this totally obvious development, but I was, to my great delight. Ha ha, another sexy seemingly not-insane gal cannot resist Mark Trail and his grinning, tan-clad quasi-autistic stylings! There’s a lot to love about this strip, but I’ll start with the fact that Sue Butler was apparently relaxing in her home with her feet tucked underneath her; note how she daintily slips her toes into her slipper, like the lady that she is! I also like the fact that she’s hanging around the house wearing some kind of form-fitting all-white outfit; she knows that if she wants to bag Mark, she’ll have to advertise her purity, because nothing repulses him like sex appeal.

180 degrees by 180 degrees? That’s … that’s not how geometry works, I don’t think. I’ll admit that those measurements may well denote something that’s not round, but rather “round.”

Note that Gunk’s enormous head appears to be protruding from a Flyspeck Island volcano in the third panel. Does that make him the strange land’s Supreme Being? Is he cheerfully telling the tale of how he, as a vengeful God, wiped out all life on earth as a whim? That would go a long way towards explaining this. 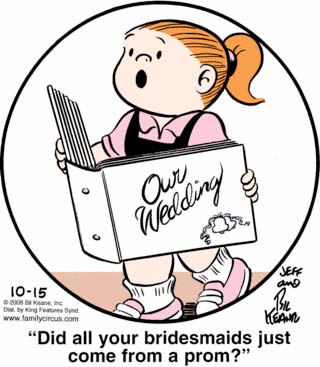 “Yes, sweetie! You see, your daddy and I got to be about sixteen and we couldn’t resist our filthy, sinful urges for each other’s hot, sexy bodies anymore, so we had to wrap them up in marriage’s holy sacrament.”

(I was originally going to write a joke about a failed attempt to abandon newborn Billy in the bathroom at the prom, but I decided it was in poor taste even for me.)

Oh, Margo, you lovable minx! “This unholy mess” is, naturally, Alan’s blood, splattered all over the Mills Gallery. You could try collecting it for your delectation later, Margo. I know you usually go for the blood of the innocent, but if you’re lucky there might be some traces of dope left in it.