Every long-running narrative form drifts towards its own extremes, which explains how Funky Winkerbean went from being an occasionally melancholy strip about high school hijinks to a charnel house. Hopefully today’s near-wordless installment is about to take things to the next level: instead of being struck down by alcoholism or cancer or garden-variety despair, Montoni is going to be devoured by the rampaging Tyrannosaurus Rex that has escaped from a secret underground genetics lab, and is now eating everything in sight. Hopefully, the new accelerated pace of death will kill off all the strip’s characters in short order, opening us up for a new, happier beginning, or at least three blank panels a day in which nobody weeps openly.

Meanwhile, over in the “fun” Funkyverse strip, the complex issue of Afghan poppy cultivation — which is the only means that many impoverished Afghan farmers have to make a living, but which fuels terrorism and religious extremism in the region and desperate addiction in the United States — provides the source material for a terrible joke about pastries for Crankshaft to squint angrily at. Crankshaft is irritated by this news report, naturally, because it promises that the smack that makes his life bearable will be more expensive in the coming months.

The third-stringers continue to stink up the field here in Apartment 3-G, as Gary, completely rattled by a little razzing from Dr. Kelly, flails emotionally at Tommie for no reason. “You two work together. Is he always a little … ODD???? Hey, don’t walk so far away when I’m shouting paranoid nonsense at you!” It’s just as well that Tommie found out that Gary can’t deal with difficult people now, before she took him home to be terrified by Margo.

“Seriously, no more! Your heterosexual shenanigans repulse me.” 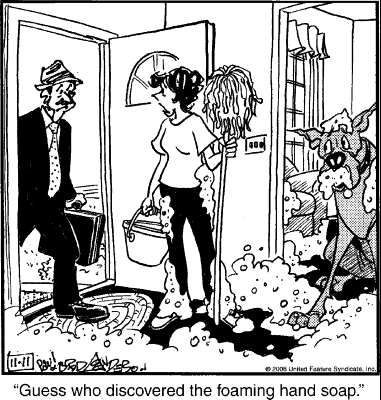 OH FOR THE LOVE GOD NO PLUGGERS AND GARAGE CLEANING NOOOOOO

(For you Johnny- and Janey-come-latelies who don’t know what “garage cleaning” is code for, travel back in time.)