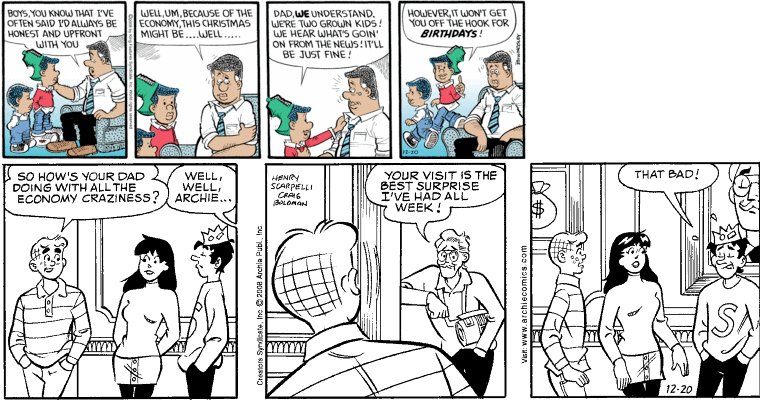 The global economic crisis has become so bad that even the most unresponsive, insulated-from-the-real-world group in America has finally decided that it must address it, or at least appear to be doing so. I’m talking, of course, about cartoonists! Today we have two attempts to grapple with the meltdown’s real-life effects, with varying degrees of realism. As a couple of faithful commentors pointed out, it’s actually kind of weird that the Wilkinses would be experiencing Christmas cash flow problems “because of the economy.” Curtis’s family has always been portrayed as thoroughly lower-middle-class, with their main income coming not from the cratering stock market but from his dad’s no doubt modest but steady income as an employee of the DMV; and unlike the last long-term downturn in the ’70s, this one hasn’t (yet) featured inflation of the sort that would put a crimp in an paycheck that only goes up by a few percentage points every year. Even gas prices shouldn’t affect them too badly, as the whole family appears to take the subway everywhere (yes, I know, the gas prices spike was months ago, but these are the comics, you have expect some lag time). Unless Greg has, like some state employees across the country, been forced to take a few unpaid furlough days, the family’s cash flow should be pretty much normal. Conclusion: Greg has either been exploiting his family’s fiscal ignorance to squirrel away extra cash, which he will spend on cigarettes, or more installments of the syrup chapter, or God know what, or is too embarrassed to admit that he was actually laid off months ago, and spends his days wandering the streets weeping openly.

Archie’s Mr. Lodge, meanwhile, is exactly the sort of person that the current crisis would keep up at night. No doubt heavily invested in growth stocks, mortgage-backed securities, and invitation-only hedge funds/Ponzi schemes, the Lodge family fortune has probably declined in the past year from nine digits to only eight. Of course, the Lodges are still richer than you or I will ever be and will never ever have to do an honest day’s work in their lives, but those paper losses are still very traumatic for someone so attached to money that he has a framed picture of a burlap sack of it hanging on his wall.

Since I last covered Judge Parker, Dixie Julep the sexy psycho stripper has bowled over a SWAT team member who was training an automatic weapon on her, leaped through a plate-glass window, dropped three stories to the parking lot below, and then dashed off into the desert — and yet Sam Driver doesn’t think she’s tough, because she bleeds real human blood when cut. We now know what this seemingly asexual lawyer really wants in a woman: a robot, or a vampire.

Seeing as I have railed specifically against the portrayal of the “sexy” lower backs of “sexy” lady birds in Shoe, I’m going to choose take the lower back tattoo that the avian barfly is sporting in today’s strip as a personal affront. The fact that Shoe is openly propositioning her for some water sports action isn’t really helping.