So! Indulge me for a moment in a little Judge Parker memory-lane-travel/detective work. Longtime Judge Parker readers will recognize the name April Bower; she was a paralegal or assistant or something in Sam and Randy’s law firm, and was briefly Randy’s love interest — here they are flirting shamelessly, right before Randy teaches her how to use chopsticks in a t-shirt worthy phrase. Anyway, soon after that touching little scene, April ran off to join the CIA, because obviously the dangerous, shadowy life of a spy was preferable to being romantically involved with Randy Parker.

Anyone who dares call himself a Judge Parker commentator ought to have had all of that information at his fingertips the moment Ms. Bower dramatically reinjected herself back into this plot. And yet I spent several moments staring at panel three in puzzlement and confusion, which, I eventually realized, was because April looks an awful lot like the mean mom of Sophie’s cheerleader tormentress! 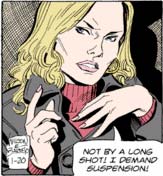 She’s even wearing a trenchcoat — just like stereotypical spies wear, HMMM? Only Abby calls this lady “Mary” and says she’s an old friend. It’s also important to note that, as those old strips I linked to illustrate, this is the first time April has appeared since Eduardo Barreto has taken over art duties for the strip. So here are the possibilities as I see them:

In other news, the elder Judge Parker’s wife is Randy’s step-mom, and while she has expressed her motherly feelings for him before, I find it creepy that someone else would identify her as his “mom” at first sight, considering that she would have had to have given birth to him at the age of, oh, let’s say -4.

You know, considering the fact that Dagwood is Dithers’s most useless and hated employee, the two of them certainly socialize together a lot. Are there no other irascible, elderly plutocrats with Mrs. Dumont-esque wives in town with whom Dithers can get together and swap tales of robber baronage? The experience doesn’t seem to be going well for Mrs. Dithers; take a good look and you’ll notice that her usually zaftig figure seems to have wasted away. Presumably being confronted with the impossibly hourglass-shaped Blondie on a regular basis has prompted a nasty case of anorexia.

There’s a line in the first X-Files movie where Mulder is rambling on in typical fashion about shadowy forces within the federal bureaucracy, and posits that someday a major nationwide disaster would strike and that’s when power would be seized by “FEMA, the secret government.” This got the biggest laugh of the movie in the theater where I saw it, and that was years before we learned all too well how bad FEMA was at its actual job, to say nothing of its hidden ruling-the-nation-with-an-iron-fist duties. But today’s Mark Trail proves that maybe Mulder just had his obscure federal agencies wrong; apparently, it’s the sinister representatives of the Forest Service who are keeping tabs on each and every one of us, silently compiling dossiers, just waiting for the moment when that information will become useful. Want to know the dirty little secrets of any citizen, anywhere? Ask your local forest ranger!

This may not be true in all regional dialects, but in my experience most Jewish people would say “at temple” rather than “at the temple” (just as most Christians would say “at church” rather than “at the church”). Maybe Sara is supposed to be Mormon, except that for all I know Mormons would say “at temple” too, plus I’m pretty sure Mormon temples are used exclusively for religious ceremonies and not as community centers for presentations like this. What I’m trying to say is, the “temple” to which she refers to is probably a ramshackle collection of trailers on the outskirts of town, the “Success Through Abstinence” lecture is all about how she needs to be saving herself for her future divine marriage to the Grand Exalted One, who was taken bodily up to the Heavenly Comet after the IRS tried to serve those papers to his compound seven years ago and who will collect his followers during the Great Return Event in 2017, and Jeremy will return home tonight with a shaved head and glassy-eyed stare.

Obviously law enforcement officers have to improvise when potentially dangerous criminals arrive on the scene on short notice; but if your idea of “improvisation” involves hurling noxious chemicals directly into the perp’s eyes, then chuckling smugly as they stumble out blindly to their car, which they’ll inevitably drive into some kind of fiery wreck — well, that says a little something about you, is all I’m saying.