COTW coming shortly, but first there are a number of exciting items to cover! I hope you will find them to be of interest.

First off, John Hall was the first of several faithful readers to send me a link to this amazing LA Times comics page from 1959. (I can’t actually seem to find the blog post or whatever this is actually used in on the LA Times site, but will add a link if someone points it out to me. UPDATE: Here ya go.) The whole thing is great, obviously, but here are a few of our favorite strips particularly worth noting:

Sadly, the preserved page was from one of the few days in which Dick Tracy did not depict a scene of gruesome carnage (though we apparently just missed a public drowning). Still, panel two should draw your attention, as Popsie appears to be weeping so violently that her inhumanly long tongue is dangling out. Perhaps she’s about to vomit?

Here’s Mary Worth, accosting a comical foreigner! My guess is that she shanghaied wealthy Cousin Constance, forced her to rewrite her will to make Mary the sole beneficiary, and then did away with her, explaining the condo-centered life of monied ease she has today.

This is Judge Parker. You wouldn’t know that if I hadn’t told you, because there are no tits in it.

Also! Many, many faithful readers pointed me to two interesting items. The first is Ombudsmen, a series in the PvP Webcomic that spoofs Watchmen with newspaper comic strip characters. It is funny! Also, in another sign that the end times approacheth, some Hollywood executives (who were almost certainly high, on drugs) have decreed that Marmaduke: The Movie should exist. I right now am personally volunteering to write the screenplay for this. In my vision, the film ends in the ultimate battle to the death between Marmaduke, with all his demonic powers in full force, and his owner, who has at last been revealed to be Hitler, kept alive by dark magic. There won’t be a dry eye (or pair of pants) in the house.

And, finally, faithful reader Orange Cactus sends this photo from a cybercafe in Mumbai. “Apparently Dennis is now outsourcing his non-menacing to India,” he notes. (Of course, Dennis has been on his extremely non-menacing public health kick in the US for years.) 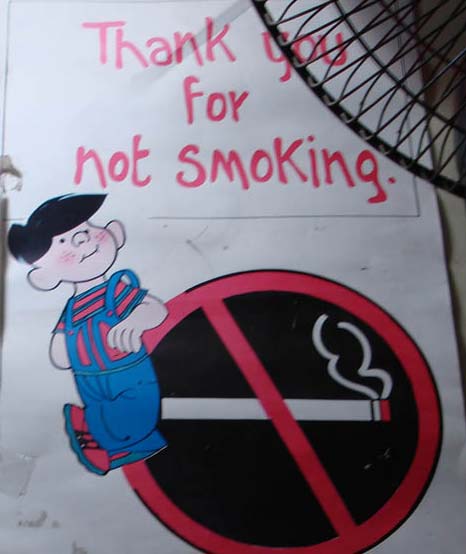 “It is so sad that Ted only has two Facebook friends. He used to have three. But then his wife died. Did you hear about his wife dying? He’s mentioned it a few times.” –Sunny Paris

“Even pluggers suffering from debilitating OCD are horrendously dull.” –Patrick

“He’s seriously injured! And look, the deer also dyed him a uniform shade of bright blue before it left! It may seem cruel to do that, but it’s nature’s way. I see it already coated you, Patty. Kind of stings, doesn’t it? You know, poachers kill tens of deer every year to sell their blueing glands to Chinese apothecaries.” –ouranosaurus

“Ashley! Watch out for that vampire going after your wrist in the hospital! The only thing worse than life in Milford is eternal unlife in Milford!” –Lithros

“Yes, every plugger must struggle with the three C’s: cholesterol, constipation, and crushing despair.” –Joe Blevins

“Recent structural changes to strips like FOOB and Winkerbean have me musing on the advantages of jumping Hi and Lois back or ahead a decade. Chip could be a new employee at Foofram Industries, working at a soul-stripping non-job at the desk next to Dad, with his long hair long since chopped to corporate-approved length and middle-aged bald patch well on the way. Dot and Ditto could be strung-out lookalikes, mooning for quarters down at the bus station for their next fix. Trixie would be ten-and-a-half, still in diapers, still unable to speak a word, forgotten by the rest of the family, continuing to mutter on internally about some damm Sunbeam. And Lois would be lounging around all day amongst bottles of Plovdiv, giggling insanely about recent parties that never actually happened. As for resetting the strip back ten years, it would at least eliminate the irritating younger characters.” –Mooncattie

“I don’t know what creeps me out more about this particular Gil Thorp entry: The old man pretending to be a trainer so he can reach up Ashley’s trunks to make sure her knee is OK, or the floating head that seems to be haunting Ashley’s bedside, hoping to have finally found a suitable body donor.” –Terry Loves Cricket

“Beetle Bailey may be guilty of a lot of stuff, including the crudest of racial caricature and casual misogyny, but there’s one thing you can’t accuse it of: relevance.” –teddytoad

“The reason that Alice got that error message is that she mis-typed her password. There’s only one e in infanticide.” –seismic-2

“No wonder the computer crashes … there’s no steering wheel. Also, you stink of gin and desperation. More importantly, 90% of the things we do, the stuff we own, and the clothes we wear would indicate that we still live in the fifties, so I can’t image that you would really understand how to use a computer. I don’t get them either, to be honest, but at least I have the excuse of being a five year old. I’m going to go sit in the corner now, because clearly expressing my opinion or showing any individuality is a punishable offense in the house. Do you know why I hang around with an ass like Mr. Wilson? Because at least he knows how to express an emotion, you cold witch. Menace out!” –PoeWar

“I think it is obvious that Patty is insane and Ken actually died as a result of his dealings with his antlered nemesis. Battered-Patty has now brought him back in the only way she can: by painting his two-dimensional face and shoulders onto the pillow.” –diddly

“The only thing that tastes worse than castor oil is cod liver oil. Or maybe the sour essence of defeat that every plugger must sample.” –Islamorada Girl

“So, what laxatives might other comic characters use? I figure Mark Trail eats grasses and ferns until things clear up.” –Brick Bradford

“That second panel of Mary Worth with the ‘Fragile … vulnerable … young…’ is one of the creepiest things ever. I think it’s his facial non-expression. I can’t help but imagine it being followed with a truly vile slurping sound as he licks his lips.” –Danel

“Haha, Ed! Just keep that suit on. You’ll save the undertaker the trouble of dressing you when it’s your turn.” –Harold

“You can’t blame me for being reluctant to let go! You know I hate it when people are happy; that’s what first attracted me to you.” –Alan’s Addiction

“In four out of seven panels, Lois’ eyes have seized open to a degree that can only be explained by a mescaline binge. I think she’s freaking out. ‘Who are all these kids? Why are they all screaming? Holy @#%#, one’s an alien! Must … escape.'” –David Schraub

“The real gold in Mary Worth today is panel four. Dr. Jeff voices an independent thought and he immediately shrinks coweringly as his eyes flash to his right to look for the blow he’s been conditioned to expect.” –Edgy DC

“Clearly there is only one way this Mary Worth plotline can end: with Ted cheating on Adrian, followed by her running back to the arms of her childhood sweetheart Anthony in a pairing heartily endorsed by her just-a-bit-too-controlling father. Wait, what?” –Windier E. Megatons

“Patty and Ken: Here’s to your future horrible half-ungulate, half sapien spawn. May it be the glue that keeps your abusive forest home together forever — or at least in shamed silence that none shall ever speak of or illustrate again.” –Lettuce

“My first thought was that April is, of course, still in the CIA. My second thought was, I wonder what’s for lunch? Then I wandered around for a little while thinking about bears and how it would be nice to see one again in Mark Trail.” –Bootsy

“Slylock’s official-looking ‘Warrant,’ when examined more closely, consists of nothing more than the lyrics to ‘Cherry Pie’ transcribed in a clumsy scrawl with crude, cringe-inducing illustrations to match. That’s the only explanation I can imagine for the expression on Koppy’s face.” –One-Eyed Wolfdog

As ever, tip jar contributors are the real heroes of the week! And our advertisers are none too shabby either: