Comments of the week coming shortly, but first, a few items of interest! The first comes from faithful reader Zamboni Rodeo, who found and scanned a classic Dick Tracy Sunday strip from Reminisce magazine. (“Mostly it is what you suspect it might be,” he says, “people submitting stories about things from their childhoods and talking about how much better things were way back when. It’s a whole magazine of ‘you kids get off my lawn’ to a certain degree.”) I won’t attempt to make like modern newspapers and shrink the size down to fit the page; you can see the whole thing here if you want. Here’s the best/most terrifying panel: 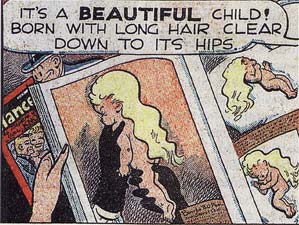 That creepy child, born with a Crystal Gayle-length mane of hair and held up by some sort of mad scientist in black rubber gloves, is the spawn of B.O. Plenty and Gravel Gertie, two characters who still figure into Dick Tracy’s madness. The baby is named Sparkle. Sparkle Plenty. You cannot tell me that drugs aren’t involved in this.

Also! Faithful reader Clare points me to Garfield: Lost in Translation, in which the titular fat cat’s dialogue is translated from English to Japanese and back by computer, with generally funny results.

Also also! Faithful Reader Jesse C is preparing his strip, All Too Human, for submission to the syndicates. Help him out by voting on the best ones!

“What kind of little boy has a dog named ‘Sassy’? Even I wasn’t that gay.” –Li’l Bunnë FooFoo

And your runners up! There are a lot of them, but there was a lot of good material to work with this week:

“Phantom, Phantom, stripes on his butt/ The ladies like how his jib’s cut.” –Mel

“And so, because Electro couldn’t succeed in sufficiently humiliating himself with that outfit, Spiderman must finish the task for him.” –buckyswife

“If those cleaning chemicals are as caustic as Ruby wanted them to be, we’re probably witnessing the genesis of A3G’s first Batman-style supervillain. Hideously deformed, Doc Joe will wander the criminal underworld for years, resurfacing in a later plotline, to the horror of all: ‘My God, his face! It’s … it’s … actually, he still looks exactly like all the other cleanshaven males I know.'” –Howlin’ Wolf

“Thank goodness for all those expository captions and speech balloons in Apartment 3-G. Based solely on the pictures, it looks like the goodwife upends her milk bucket over a man’s head while James Coburn gives him a shoulder massage. In the final panel, Dame Edna shows up with a cell phone. So much like my dreams, it’s scary.” –Steve S

“It was somewhere between ‘Back off, Joe, or I’ll shoot,’ ‘WHACK WHACK WHACK,’ and ‘Do you girls want me to taser him?’ that I realized I had found my Apartment 3-G Spot.” –Melissa G

“Mrs. Bloom’s soliloquy: I was the flower of the building yes when I put the rag on my hair like the Staten Island girls used or shall I wear a red yes and how he kissed me under the Tibetan wall in all my red silk yes and I thought well as well him as another and in the harsh glare of the Dakota sun I asked him with my eyes to ask again yes and then he asked me would I yes to say yes my apartment flower how will you Bathroom for me and first I put my arms around him yes and drew him down to me so he could feel my breasts all perfume and solvents yes and his heart was going like mad and yes I said yes I will pull that Tazer from under the pillow and place it like a scapular to his chest and find my trigger and yes Yes.” –Uncle Lumpy

“So is Montoni’s like the Michael Patterson of the pizza world, or do the Funkians only eat there because there are no other restaurants? I’m kind of picturing that scene in 1984 where Winston wonders if there ever was such a thing as food that tasted better than what he gets, only with pizza.” –commodorejohn

“Tommie’s stupefaction in panel two is entirely justified by the sudden tone shift. ‘Um, hello guys? I just went through some serious Cape Fear/The Shining bullshit, and now suddenly we’re all sitcom-laughable with the wacky taser-happy neighbor? Come on, when Lu Ann hallucinated that swirly pastel painter and fainted everyone was sober and concerned for weeks, but I have to Rorschach my way out of a bathroom and all of a sudden it’s Marmaduke??’” –teddytoad

“I don’t think Margo is as much taken aback as jealous that Mrs Bloom is packing superior weaponry. All Margo has on her is her umbrella, a shiv, and a small thermonuclear device, which is not so useful at short range.” –Les of the Jungle Patrol

“All that’s left is for Mary to swoop in and send Adrian to Vietnam. She probably won’t see any red flags there either.” –Uncle Fritzy Ritz

“Ah A3G, where everyone shows just the right level of childish glee at the opportunity to test out a brand new taser. Except of course for Tommie, who hasn’t felt anything since 1997.” –sak

“At least he didn’t mention that the specter of his dead wife also thinks he’s dating.” –rhymes with puck

“Oh, now I get it. Cayla’s sort of drunk. That’s what makes these ‘dates’ with Les just barely endurable. Good for her.” –sugarpie

“The curious twist in Apartment 3-G is that this entire scenario is a complicated sex game engineered by the secretly-involved Mrs. Bloom and Dr. Kelly. ‘And then they’ll tie you up and put a bucket on your head.’ ‘Yes! And then what?’ ‘Then I’ll use the taser!’ ‘Yes! Yes! Yes!'” –yeff (Jeff Soesbe)

“If you were trying to choose the exact shade of beige that dogs aren’t, you could not choose any better than Jack Elrod has chosen.” –One-eyed Wolfdog

“I have no criticisms or snide remarks for Dick Tracy today. Today’s DT is a thing of beauty, wonder and joy. I only wish that all strips had the brilliant audacity to turn themselves into a constant stream of disorienting, mindless violence perpetuated by the titular characters. It’d make both Cathy and Marvin worth reading, I know that.” –Alan’s Addiction

“I think Toni and Brad are about to have sex! Either she will land face first into Brad’s crotch with her big, plump lips smashed into his junk, or her uniform will come undone as she flies into Brad’s waiting … uh … appendage? Either way, it will be involuntary.” –Desert Ghost

“I see in the third panel that Mark Trail has now morphed into a new comic, The Adventures of Young Karl Malden.” –Capn Gravy

“I’m convinced Pluggers is a stealth campaign to destroy the furry lifestyle. What else could so effectively turn people off to the idea of being a furry? Certainly not prejudice and rejection from mainstream culture!” –avatarjk137

“Which of Brad’s squishy innards did Toni Daytona rupture or lacerate when she flopped off the ladder, driving her oxygen tank into Brad’s barrelly torso?? What, all of them? Good answer!” –Spotted HØrse, Jungle Steed

“I dunno, there is something refreshing about the straightforward laziness of today’s Pluggers. It is like the author just got up on the wrong side of the bed one day and when asking himself for the one millionth time ‘What the hell is a Plugger, anyway?’ he snapped back, ‘Douchebags who still use dial-up! Leave me alone and let me get back to trolling mininova for leaked footage of Wolverine.'” –Reepicheep-chan

“9CL: Like the unholy hybrid offspring of Love is… and a thesaurus.” –Winky’s Spleen

“Everyone thinks Brad is seriously injured, but he’s really just trying to hide the huge erection he got from actually touching his groin to the ass of a woman he isn’t related to.” –Hank

“Dead Lisa, being dead, is the only character in FW who is allowed happiness. And as far as I know, dead people don’t get cancer. I say make her the main character.” –Mac

“‘Twitter’ is the sound Sally makes when Ted wrists her. (His hands are too dainty to make a good fist.)” –Comrade Denny

“That last GT panel is haunting me. It looks like the lead-in to a CSI episode. After analyzing the freeze frame, I can only conclude that Coach fired a blazing fastball directly into Robb’s mouth (note the impact lines), which has come out the back of his skull and evidently is now propelling his baseball cap offstage left as he flails in his death seizure. Bits of flying bone and/or teeth litter the scene for the final grisly touch.” –Talking Squirrel

“I’d like to think, with the way Cayla is holding Les’ head in both hands, that she’s about to say, ‘If you’re still so into your dead wife, why don’t you JOIN HER IN THE BACK SEAT?!’ and then she snaps his neck with military precision.” –Patrick

“Paranormal necrophilia sounds so good when I say it out loud but I’m sure to be disappointed. This is, after all, Funky Winkerbean, the strip that delights in reader disappointment.” –thurston unger

“I predict Funky laying off Les to save money. Les won’t be able to afford Summer’s college and Summer will start taking steroids in order to play better and get a scholarship and… I could go on, but I won’t. Let’s just assume it ends in tragedy, shall we? Mime death for everyone!” –zooby

“Speaking of 24/7 Big Brother style monitoring, Skyler has just realized his technologically incompetent uncle, unable to get news from anywhere but the long since cancelled newspapers, is unaware that The Regime has banned making jokes forever on pain of death, and that he is watching the old man’s mercifully short final moments.” –Black Drazon