Say, it’s been a while since we checked in with Margo. What’s she up to? Destroying Eric Mills’s legacy of presenting the work of talented artists to a discriminating public, it appears! “Look, Jack, it doesn’t matter what you think; I’ve already signed the franchise agreement. Starting tomorrow, the Mills Gallery is rebranded as Mills Gallery Presents: Thomas Kinkade®, Painter of Light™.”

Oh, also, we get some bonus parental sassing. Jack appears to appreciate it as well. “I can’t agree with her business decisions, but darned if I don’t love her moxie! I wonder if she likes jowly, balding men who appear to be older than her father?”

(By the way, it’s good to see that Margo no longer suffers PTSD attacks just from hearing the syllable “zip.”) 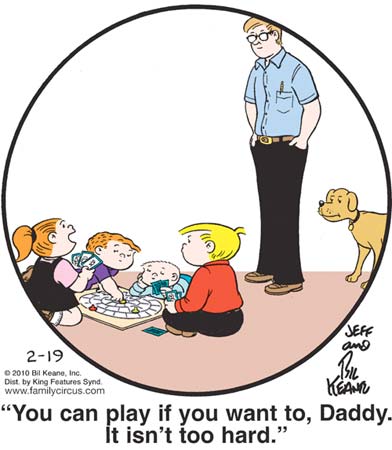 The problem with creating all-ages entertainment is that it tends to go for the lowest common denominator. Thus, this game, which is easy enough for Big Daddy Keane to play, has clearly bored P.J. out of his mind. Look at him there, holding onto his cards, and obviously dreaming of playing no-limit poker or something that might actually engage him a little. 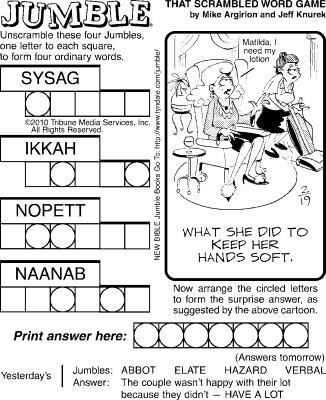 Holy crap, over the last couple of days the Jumble has been laying down some serious and radical social commentary! Ha ha, while you poor saps go hungry in your empty kitchen, this rich lady sits in her chair ordering her servants about! Once again the blank letters for the solution aren’t numerous enough for the obvious answer: SOAKED THEM IN THE BLOOD OF THE MASSES.

Hey, Sabretooth, why are you so sure that only Spider-Man knows where Wolverine is? Have you even considered asking anyone else? I think you’re hurting Daredevil’s feelings; he probably keeps swinging by you hoping you’ll strike up a conversation.