Oh my goodness, SO MANY DRAMAS AND SADNESSES in today’s Mary Worth! Dawn abruptly puts a stop to her intimate moment with Wilbur as she notices Kurt lurking in the other room, puking into his hand. Then she dishes some dirt about her father’s inability to sustain a relationship. “Yeah, after mom woke up one day and said ‘Holy Christ, I’m married to Wilbur Weston?’ I lived in Connecticut with her … until I got caught robbing a liquor store, and the judge told me I had to choose between juvie and moving to California to live with my dad. When I think about the fact that I’d be a free woman back on the streets again if I’d made that first choice, whereas now I’m still living here … ugh, it gives me chills. Anyway, you didn’t miss much, trust me.” Meanwhile, Wilbur, left to his own devices, has immediately wandered back to the computer, desperately trolling Facebook for more long-lost offspring who will at least briefly pretend to love him.

A wild-eyed maniac spouting nonsense? A group of lanky shadow-figures, waving their arms about in panic? An extreme close-up on the stylized face of a woman keening a single piercing note of pure terror? The best Dick Tracy in many a moon? Yes, yes, yes, and yes!

It appears that Killer’s constant tree-fucking ways aren’t just expressions of his perverted nature; he’s actually part of a top-secret military experiment to breed intelligent and deadly tree-human hybrids. You know who’s going to freak out and emit a single panicked ball of sweat when he sees one of those hairy prehensile root-tentacles slithering into his cave? Osama bin Laden, that’s who! 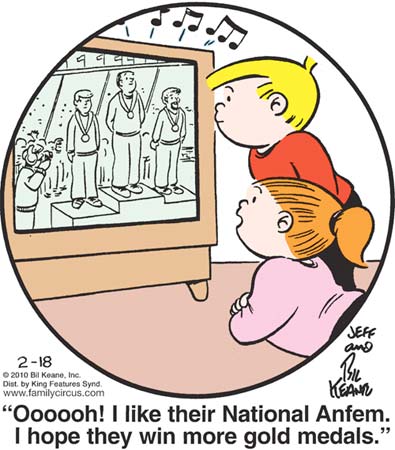 Mommy and daddy better not hear that traitor talk, Dolly, or someone’s going to learn that one ought not to let one’s aesthetics affect one’s patriotic allegiances … in Gitmo. 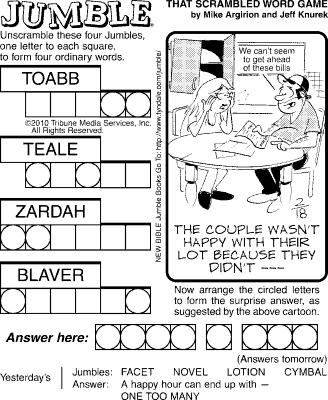 As it features a desperate looking couple sitting around a kitchen that’s almost completely empty except for a pile of bills, I’m pretty sure this is most depressing Jumble ever. I keep staring at the answer blanks, and all I can think of to put there is “HAVE ANY MONEY.”