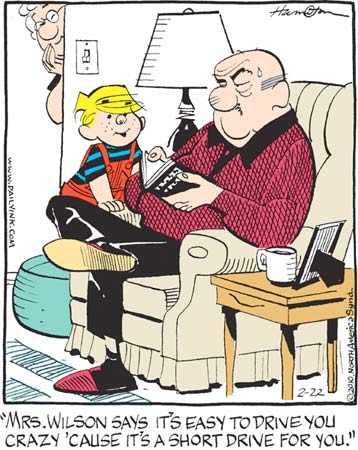 You know, for a long time I’ve wondered why exactly Mrs. Wilson constantly encourages Dennis to come over and raise extremely mild hell at her house, when her husband obviously loathes him. I’d always just chalked it up to a difference in opinion combined with an absence of solicitousness one might expect from a longstanding and not particularly passionate marriage; if there were any grimmer undertones, they might involve the children that the maternal Mrs. Wilson seems to have always wanted but that Mr. Wilson was unwilling (or unable?) to have with her.

But today’s strip casts an even darker pall over the marital dynamic. Mrs. Wilson fills Dennis with trash talk about Mr. Wilson’s mental state; far from worrying that the filterless little moron will run off and repeat it at the first opportunity, she actually waits just around the corner to make sure that he does, tittering to herself at her husband’s discomfiture. Mr. Wilson’s trademark creepy single bead of sweat is the payoff; she knows that one of these days, Dennis will push him over the edge and he’ll die of a massive rage stroke, and then it’s off to Boca with his Post Office pension.

Mark Trail is an action-based continuity strip, but the sad fact is that some kinds of action translate better to comic strip form than others. Punching, for instance, seems to work out pretty well! But a thrilling canoe ride through rushing rapids: not so much, apparently. “To get their friend to a hospital as quickly as possible, Mark and Ben Harris run the dangerous rapids at Devil’s Pass. Aaaaannnnd … they’ve successfully gotten through the rough spots, after just a panel! Boy, that was a close one. Uh, here, enjoy this close-up on a magnificent raptor, won’t you?”

“Now that cold, heartless medical science has proven that the son I loved so much is a fraud, I’m going to end it all by downing a big glass of cleaning solvent! Care to join me in the sweet release of death?” 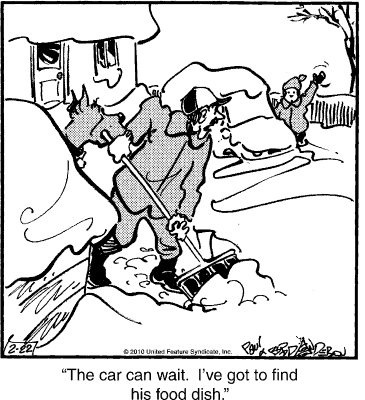 “You don’t understand! He … he hungers! Please, your Dark Majesty, I’m digging as quickly as I can! No … nooooooo….“