One of the interesting things about legacy comics is that over the years the edges slowly wear off their high concepts. So, for instance, Hagar the Horrible is a savage Viking chief, but he spends more time bickering with his wife than he does raiding a hapless Europe, and when he does go marauding it’s all done in the most ritualized and bloodless way. Beetle Bailey is in the army, but he’ll never be ordered to shoot anyone or put himself into a position to be shot at, nor will he ever be hauled before a court martial for his various violations of military discipline.

The Wizard of Id is one of several characters, like Funky Winkerbean and the late Kudzu, who found themselves muscled out of the spotlight of the strips ostensibly named after them, and, well, I guess I’ve never really thought of him as all that “dark.” I mean, I suppose he is the royal wizard for a king who routinely tortures his citizens and imprisons them for years without trial, but for the past several decades his powers have mostly been put to use conjuring up minor ghosts and irritating his wife. I dunno, I guess I just expect more malice out of my dark wizards. Another modern punk kid ruined by Harry Potter!

If we want more proof of Kurt’s complete insanity, we should look no further than panel two. If I had been shown a picture of some demon nerd, his eyes glowing the most intense and evil brown, attempting to yank off a lock of young Teri Garr’s hair for who knows what foul purpose, I would have wanted nothing to do with him, yet Kurt actively sought him out! There’s nothing such a person wouldn’t be capable of!

In panel one, we see the final stage of Wilbur’s feeding process. Having crammed an entire sandwich down his gullet with a single shove, he’s now keeping his hand in place over his mouth to make sure it doesn’t come back out. When Wilbur eats a sandwich, it stays eaten (most of the time). 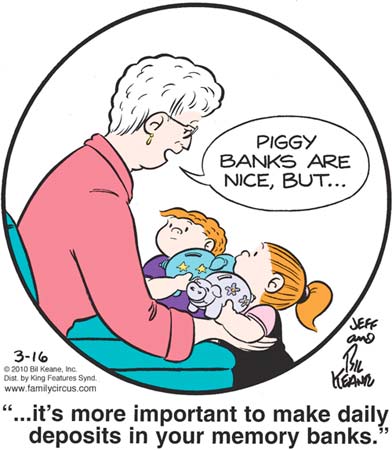 “So why don’t you let me hold on to these, dearies, while I keep them safe for you down at the greyhound track?”