Political blog Wonkette, for which Josh writes reviews of editorial comics under the title Cartoon Violence, has published a photograph showing a Sunday comic on President Obama’s Oval Office desk. Which comic? Alas, it’s Pickles — which never appears here because it is beneath notice even in its lameness. Original comic here. We now return you to our regularly scheduled programming.

Faithful readers of the Comics Curmudgeon will have long ago figured out my schtick: scan for a theme that links two or three comics, riff on it with a few cross-references to established CC tropes, glissade to some bizarre plot turn in a soap or clumsy foulup in a joke-a-day strip, and so to bed.

Mostly the comics oblige, with a banquet of lunatic plotlines laid out like gleaming slabs of red meat, verbal and graphic faux pas arrayed around them like trays of toothsome hors d’oeuvres. But on nights when those tables are bare I am alone, straining through the muck beneath Quigmans or Cleats for some — any — undigested morsel, my anguished moans for this cup to pass met with stony silence, except for the ticking of the clock toward 1:46 AM and spatter of desperate tears on my keyboard.

It is in those dark hours that I turn to Crock.

And what do I get? A technology joke rejected as too lame for Pluggers (“A plugger’s netbook is the Cabela’s catalog.”) or For Better or For Worse (“Is John gambling online in the den?” “Yes, he’s on the netbook … in his bet nook!” “Hahahaha!”). Marred further, if such a thing is even possible, by the redundant “three-day” in panel one.

Ah, Mark — never too busy for the Safety Lecture, are we? Y’know, if Gladys had her wits about her, she’d shoot Mark in panel three and claim he looked just like a purse-snatcher.

June is intrigued: ineffective pleading by a nominal male; icy rejection by the bitch in charge — looks like love to her! 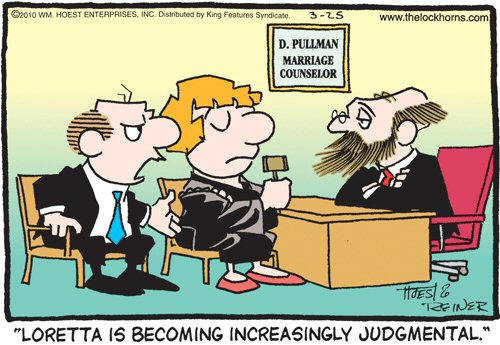 “Agree with him and I’ll put another dent in that head of yours, Pullman!”

A sincere thank you to everyone who has contributed to the Comics Curmudgeon already this week. If you’re not yet among them, please consider this: lots of factors go into choosing whether to blog or not, but for a freelance writer/editor like Josh the tradeoff between blogging time and income is inescapable. The more we can make the Comics Curmudgeon an economically rational choice, the more time and enthusiasm Josh can devote to our entertainment. And who doesn’t want that?