I’m sure your first cynical reaction upon seeing a mugger on modern planet Earth refer to someone as a “witch” was that this is a comics-page-friendly stand-in for a more common contemporary unpleasantry identical except for the first letter. Consider, though, the ruffian’s oddly anachronistic cowl. Isn’t it at least possible that he is in fact a medieval peasant, rudely thrust, via some natural or man-made temporal anomaly, into present-day Manhattan? To a man who’s grown up in a rigidly patriarchal society, a woman such as Bobbie — brash, forward, apparently unattached, laughing in the face of death — might seem like a terrifying sorceress. Also, our man probably knows no trade other than subsistence agriculture, and his lack of any skills that would be economically useful in the 21st century explains his turn to crime. In short, Bobbie is probably actually just being threatened with a crudely made dagger, or, at worst, an early flintlock pistol more likely to blow up in our misplaced serf’s hand than to do real damage to his target. 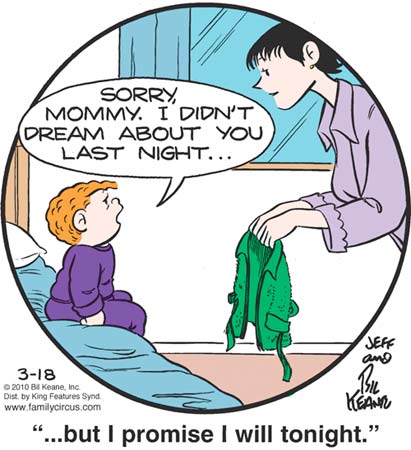 As if the dialogue in this panel weren’t already creeptastic, we also have Jeffy’s exhausted-looking face, which reads not so much as “adorable little kid just waking up” but more as “child exhausted and terrified from trying so hard to dream about YOU MOMMY, ONLY YOU, BUT IT’S SO HARD.” Sorry, Jeffy, if you can’t do it yourself, you’re going to have to wear the Night Terror Jacket again!

One of the more baffling undercurrents in this Mark Trail storyline has been a simmering political debate about whether or not “big motors” should be allowed to operate on the lake that has been the focus of the action thus far. I’m not particularly clear on how any of the characters stand on this crucial issue, but the Parker Brothers’ two-smallish-motor-powered boat appears unlikely to satisfy either side. Surely the anti-big-motor activists will point out that this arrangement produces as much noise and pollution as a truly big motor, while big motor aficionados will sneer at the half-assed measure.

Meanwhile, Mark still seems to believe that anyone anywhere still keeps “supplies” in an “icehouse.” Current smart betting on what’s behind that thick door is clustered around “growhouse” and “grisly collection of corpses on hooks.”

Actually, providing adequate sanitation for mobile armies is a problem that has been a crucial part of military planning since the ancient world. It’s one that’s particularly important for armies in the countryside attempting to besiege a city or castle, as Id’s catapult-armed forces appear to be doing here; it wasn’t uncommon for sieges to be lifted not because of the defenders’ military triumph, but because diseases like cholera or dysentery, spread by sewage that hadn’t been dealt with properly, had devastated the besieging army. In fact, in the Crimea in the 1300s, the Mongols … oh, wait, this is the Wizard of Id? Uh, never mind. Ha ha, pooping is funny!

Programming note! Your faithful blogger is now finished with his SXSW adventure … but is just turning around and leaving for a real actual vacation! Said vacation will entail handing over the reins to the inimitable Uncle Lumpy, starting tomorrow and going for a bit longer than a week. Play nice while I’m away!