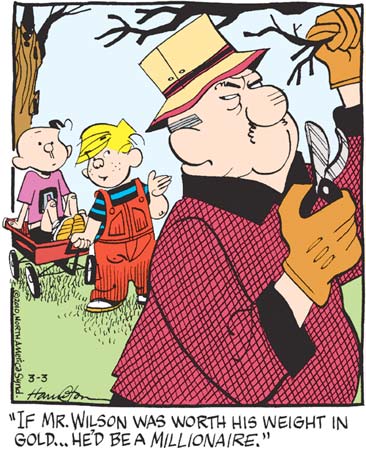 Yes, it’s always fun to find novel ways to mock Mr. Wilson’s weight, Dennis, but with gold currently trading at around $1,150 an ounce, in all likelihood you’d be worth a million bucks yourself! Your little friend there, who’s so badly emaciated and weak that you need to pull him around in a wagon, probably not so much.

If Dennis were to become some kind of gold bug, that would be a new and interesting dimension of menace. Instead of just cracking wise about his tubby neighbors, he could instead “accidentally” hit baseballs through the windows of members of the Federal Reserve Board of Governors, and monopolize classroom time with extended diatribes about the fraudulence of fiat money.

More evidence that Ari is the worst psychiatrist ever: his identifying some faint reflection of an external light source in Tommy’s dead, emotionless eyes as a “sparkle.” The most one could expect to see there would be a glimmer of relief — in this case, relief because the Professor’s brief, vague recap of his entirely self-inflicted problems has confirmed for Tommie that her policy of not making any sort of effort at personal fulfillment or happiness is for the best. 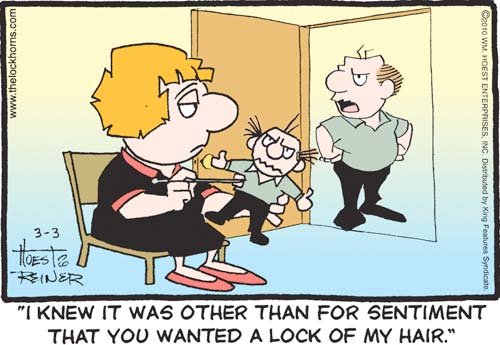 Speaking of dead, emotionless eyes, today’s installment of the Lockhorns is particularly harrowing. It is of course not surprising that one half of this doomed couple would resort to dark voodoo magic to inflict pain on the other; but you’d think that Loretta would at least be experiencing a bit of joy from the prospect of tormenting her husband with the help of poweful spirit beings, or that she’d show guilt or defiance at being discovered in the act. Perhaps she should be sticking a pin into a voodoo doll of herself, since that appears to be the only way she’d be able to feel anything.

“Outside the political arena, we are passionate lovers, as this bouquet of red roses indicates! Good day, gentlemen!”

Senator Wallace’s outfit is not dissimilar to that sported by known lothario Mr. Kessler, so this is as good a place as any to note that the fellow has his own Twitter feed now. More proof that Mr. Kessler doesn’t go for teenage girls; if he did, he’d have set up a MySpace account.