Ha ha, this is without out a doubt the greatest Herb and Jamaal ever. Rev. Croom just wants to have a little lunch in peace — but no, this little creep, the one who only shows up at church at Christmas and Easter, and whose mother-in-law he wishes would only show up at Christmas and Easter, has to badger him about eternity and crap. Fine, there’s nobody else here, there’s plausible deniability. “Sorry, kid, you’re going to be tortured in Hell for all eternity with the other damned souls,” he says, just stone-cold sucking his tea through a straw. “Now are you going to bring me my lunch or what?”

If I didn’t already know that this Mark Trail storyline was essentially a repeat of one that ran thirty years ago, I’d say that we’re witnessing a quantum leap forward in Trailian storytelling. As a rule, the narrative is relentlessly linear, and thus I assumed that yesterday’s shameless flirting was going to lead inexorably to some major plot point. Instead, it may have just been a bit of throwaway color meant to provide Mark with a key piece of information. Mark, meanwhile, seems to have made the monumental discovery that not every firing of a neuron in side his hair-helmeted skull needs to result in the immediate verbalization of the resulting idea: note in panel two that he’s actually managed to muster a genuine thought balloon. This first feeble specimen only encapsulates the vague notion of questioning, but with effort Mark may discover that it’s possible to think whole words or even sentences without saying them aloud.

I find the scenario depicted here rather puzzling. It’s not because Momma’s being hit on by some gnomish bow-tied individual — there’s a lid for every pot, as my father once said to me, though in this case it appears to be a gold-digging lid; rather, I just have no clear idea of where exactly the action is supposed to be taking place. What setting might include a Momma-sized easy chair and a potted plant, but also be open to the public so that strangers might wander in and harass her? Is he cruising for babes down at the senior center? 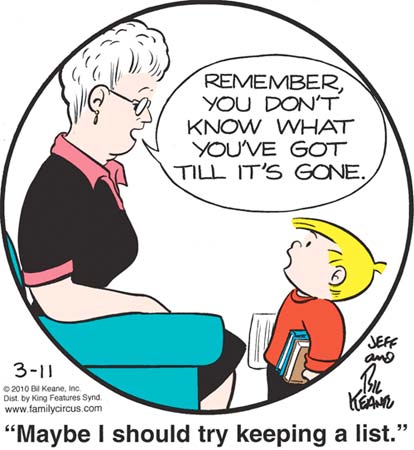 Little known fact: Grandma appears in the strip only occasionally because she spends most of her time — and most of her grandchildren’s’ inheritance — following ’80s glam-rock band Cinderella around the country. When Cinderella isn’t touring, she keeps busy jamming with her Cinderella tribute band, Glass Slipper.

They’re still cousins, though, so this may make Thanksgiving dinner awkward.