Oh, goody, Apartment 3-G is revisiting an important plot point from Sunday that I neglected to mention, namely the “private psychiatric facility upstate” into which the so-called “sane” characters in this strip are bamboozling our poor Bobbie. The Professor, of course, was the one who was prescribing pills to Bobbie and screwing her, possibly not in that order, so he’s the most suitable candidate for disposing of her in a way that’s convenient for everyone, without the pesky police getting involved. One wonders who’s paying for this fancy private facility! Martin, with his alimony checks? The Professor, out of guilt? Actually, if my suspicions are correct, it may be the sort of institution where she can earn her keep just like Margo did.

Oh, look, Crock is trying to capture that awful yet moving vibe of yesterday’s Hagar the Horrible. Unfortunately, the sort of little grace notes that made that other strip work in spite of itself are wholly missing from this one, and the details that are present are just jarring and wrong (vultures do not have teeth, for instance). But mostly a steaming, bloated corpse being picked apart by a grotesque scavenger bird just doesn’t have the same grim majesty as a good burning at the stake, I’m afraid.

Against all odds and logic, teen alt-country sensation “Slim” Chance has decided to spend his spring afternoons with the losers and yahoos on the Mudlark baseball team, possibly because he hopes to use their pathetic dreams and broken lives as material for his songwriting. He’s already blowing the kids’ minds with his crazy musical stylings; I’m assuming one of the major spring plots will involve his teammates, who have grown up on a diet of the terrible rap-metal, learning about good, wholesome music, like this country standard about adultery and murder. 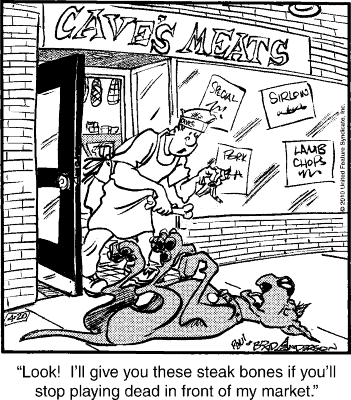 Marmaduke is the last creature one would expect to see engaging in the sort of nonviolent passive resistance that Gandhi and Martin Luther King used to effect social and political change. It’s more likely that he’s hoping to lure unwary passersby close enough for him to kill and eat.

Tobey is overjoyed that Mary has at last made another friend, which takes the pressure off her, and is thus trying to minimize any potential flaws Mary might see in her. “Oh, she’s a big shopper? Is that all? That’s no reason why you two shouldn’t be thick as thieves and spend all your free time together. Whoa, is it 1:30 already? Gotta go! Later Mary! Say hi to Bonnie for me!” In panel two her hand is shaking in anticipation of freedom, sweet freedom.