The final deadly confrontation between Spider-Man and Sabretooth that we’ve all been waiting for has at last arrived — only to be derailed by the appearance of Wolverine. Since Sabretooth was only harassing the web-slinger to find his brother, I assume that Spidey and Mary Jane can now quietly leave the theater and let this family spat work itself out. Whew, another opportunity for superheroics thankfully avoided!

Note that Wolverine learned a little about living the good life from his earlier encounter with Spider-Man: his villainous brother was apparently unable to track him down because he’s been spending his time in his apartment, watching television. I am impressed that he’s no longer sneaking into the back of trucks and instead is flying commercial when he needs to travel long distances.

I’m not sure if we’ve ever seen Dumpy Dog before, and thus the strip doesn’t trust us to automatically assume he’s guilty, even though he displays the poor posture and grooming endemic to the Slylock Fox rogues gallery. “Look, we’ve already done the legwork on this one, OK?” the strip is essentially telling us. “Just count the damn spiders.” I guess this is how Max feels, all the time?

Archie’s dad remembers a day when youth were afire with literary passions! They stayed up late at fashionable salons, smoking and drinking wine and arguing the merits of the latest Booker Prize winner until the wee hours. They really believed that prose could change the world, and thus it’s terribly depressing to him that the next generation sees in printed matter only utility. There is a cold majesty to the practical advice in the books Archie reads, but the magic that once animated his father’s days is long gone. 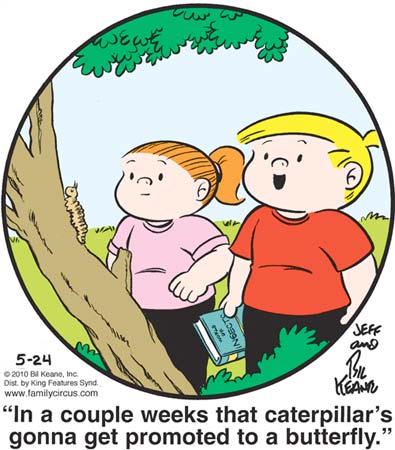 Speaking of the death of enchantment, the Keane Kids are so crushed by omnipresent corporate culture that their very souls are stunted. The transformation of a caterpillar into a butterfly, once a source of such wonder to so many generations of children, has in their minds been reduced to an act no more interesting than the elevation of a group coordinator to an assistant regional manager. One imagines the chrysalis bursting open and the butterfly shaking its wings free, only to settle into a cubicle just slightly larger than the one it left, under the glow of the same harsh fluorescent lighting, wondering if this was really worth all the striving. 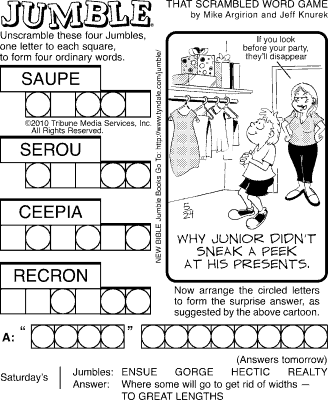 Now here’s a kid who hasn’t lost his belief in magic. “Remember, if you see your presents before your birthday, they’ll vanish into the ether! And mommy will know you’ve been naughty, and will kill you with her mind.”