It’s another fun Sunday of individual panels from individual strips! Let’s see what’s up. Say, has Mary ingested some kind of powerful mood-altering drug that has caused her to pupils to dilate to pinpricks as she blathers on about sunny nothingness? 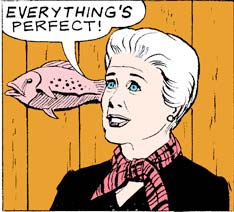 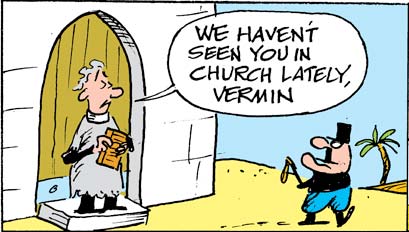 Crock trufans of course know that the strip’s title character’s full name is “Vermin P. Crock.” This is hard information to come by for the casual reader, because his terrified underlings never refer to him by first name; apparently only the local man of God has that privilege. So, for the 99 percent of humanity who is not aware of this Crockiana factoid, it would appear that Crock is being verbally abused by a priest, which would actually fit in nicely with the general attitude of cruelty that defines the world of the strip.

This is the same A3G fight that’s been happening all week, but it’s nice to see a comically rendered narration box breaking up the ennui. Perhaps it’s a phenomenon related to this classic Margo word balloon. 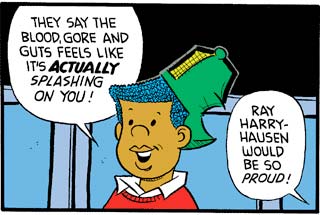 Yes, many elementary-age children have the name of a special effects artist whose work last appeared in a major full-length motion picture 29 years ago right on the tips of their tongues. Barry is a true cineaste and student of film history, which is why he complains so much about the terrible movies Curtis drags him to, I guess.

And hey, is Mary still tweaking along at full blast? 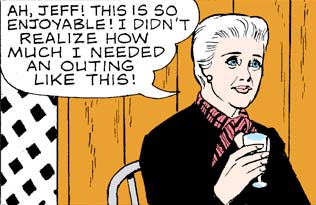